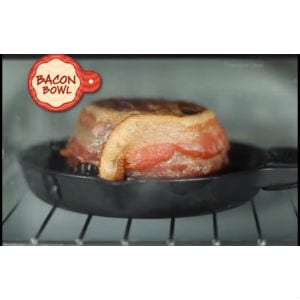 The Bacon Bowl allows you to make a bowl made out of bacon. Yes, you read that correctly, you can make a bowl that consists of nothing but bacon. Bacon is trending right now as a food that is being incorporated into more and more foods, but is this something that can actually work?

Overview
If you’re a fan of bacon you probably see the value in having a bowl that is made of nothing but this porky product. You could make breakfast treats with it, or use it to make interesting game time fair like burgers served in a bacon bowl, or plenty of other recipes, since they show you all sorts of ideas on what you can do with it.

The Claim
They say that the design of the Bacon Bowl is patented, so you won’t see other copycat products hitting the market. They also say that this is a healthier way to make bacon because the fat drips to the bottom and there is a reservoir to catch the grease so you don’t end up with it in your system. They also say that you’re able to make bread bowls with this, and that they show you how to make everything in the included recipe book.

The Hype
Basically, this product needs to “sell the sizzle”. This is a sales term that means that you focus on the experience that a product or service will provide, rather than the product itself. Here they are selling the mouthwatering nature of bacon, and how it just seems to make everything taste better. They are really playing to the bacon lovers out there, and have more than likely made a bunch of sales just by people conjuring up images and sensations of what it’s like to cook and enjoy bacon.

The Cost
You end up getting a total of four Bacon Bowls for $26 and that includes shipping as well as a recipe book. There aren’t too many other product out there aiming to be your bowl of bacon choice, so it’s hard to get a read on whether the price is right on this one. But since there’s enough to cook up bowls 4 at a time and a recipe book to show you how to make things it seems like a decent price point.

The Commitment
This should make it a bit easier to make a bowl of bacon than using a muffin tin or other setup. This is mostly used just for bacon bowls, so you have to consider whether you need a product that is exclusively for bacon.

Evaluation
The Bacon Bowl makes it so you can take an ordinary meal and make it a bit of a novelty. It can also make other bowls, like bread bowls, which means you can make all sorts of different meals with this. That’s what really puts it over the edge as a good buy, since you’re getting a lot of different options with it, and you aren’t limited to just bacon. Of course you’ll want to be pretty excited about just the bacon part of it, since that’s it’s primary function.

Getting four of these in one set is a nice bonus, since you’ll now be able to cook up four at once so that everyone can eat at the same time. What’s nice about this is that it’s using the oven to cook the bacon, so you’re not frying it on a pan. The fat and grease of the bacon drips down, so this is a healthier way to make it than traditional preparation where it’s cooking in its own grease. You can pop this in the oven and not worry about getting splattered by sizzling bacon on the stove top.

The Bacon Bowl is getting our Thumbs Up, it really works! It’s not as if it’s rocket science, it’s simply a non stick pan that helps you shape the bacon into bowl form so that you can use it for several different applications. The real kicker here is that you have several different ways to make the bacon, you can use either the oven, or the microwave, or a toaster oven. This is what makes it a better choice than using a muffin tin or other kitchen gadget.

Our Recommendation
Because they give you everything you need in order to make different recipes with the Bacon Bowl, it’s getting our recommendation for the bacon lovers out there. With the recipe book they include you won’t be lost on what to make with it, and you’re likely to find a few favorites that you’ll be able to make again and again. If you’re willing to invest a bit of time to learn everything you can make with this, you’ll likely use it enough to justify the purchase.

What do you think? Does the Bacon Bowl work or not?

4 Customer Reviews on “Does the Bacon Bowl Really Work?”