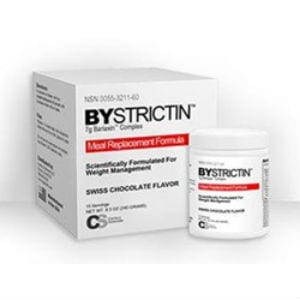 Bystrictin is a weight loss shake that compares itself to gastric bypass surgery. The way it works is used by many other products, so we had to see if real users are actually getting the sort of results that could compare to a surgical procedure.

Overview
The concept is simple enough: fill the stomach up with the shake, and then you’ll end up eating less than you otherwise would. There are plenty of ways to fill up your stomach, including drinking water, which has been stated as a way to help curb your appetite before a meal. In this case they are saying that it uses a blend of ingredients that expand in your stomach, triggering the full signal to your brain.

The Claim
The makers of Bystrictin claim that it fills up your stomach which causes you to eat less in the same many that gastric bypass surgery reduces the size of your stomach so that you feel fuller faster. All that’s required on your part is to drink the shake, and then drink a glass of water so that it can can expand. It also contains fiber so it should improve your regularity, which would also promote weight loss.

The Hype
Diet products like these have the hype built right in because they are promising that you’ll lose weight by just taking a pill or drinking a shake. It sounds easy enough, and the premise is easy to grasp, the longer you feel full the less eating you’ll be doing, including snacking and bingeing on foods that you know are bad for you. Saying you’ll get similar results to gastric bypass surgery is pretty over-the-top, and we’d recommend setting your expectations a little lower than than, and perhaps far lower once you see what people are saying about it.

The Cost
The cost of Bystrictin is $70 for their starter pack which gets you one month supply of it. They also include a shaker bottle to mix the shakes with. You can save money by getting more than one at a time, such as 3 for $140 ($46 each) or 5 for $210 ($42 each). They also give you the option of joining their auto-shipment program which gets your cost down to $40 a cannister but then again you’re signing on for auto delivery and automatic charges until you cancel.

The Commitment
How long you stay on with this would be totally up to you and how much weight you want to lose. You might also want to change your eating habits if they generally are not so good. This will give you teh best results, and smaller portions of healthy food rather than larger portions of unhealthy food. Although it’s still possible that you could use this and not change your diet and still get results since you’d be eating less of the food that is causing the weight gain.

A big appeal to this shakes is that you don’t necessarily have to exercise while you’re on it, and several other shakes out there contain protein so you’re supposed to be lifting weights while taking it. But it is products like these where your role is very limited that can be very enticing, but also very deceiving. Change is hard, but if you really want to lose weight the best and most proven way is to make some small changes gradually until you get to where you want to be.

Evaluation
Bystrictin comes in powder form that you add water to. It’s important to also drink water after drinking the shake so that it can expand fully in your stomach. The feedback that this is getting is not suggestive that the product actually works. Of course there are some that say it’s working for them and they’re losing weight with it, but the majority of users are saying that it either did nothing for them, did not have an impact on hunger levels, and in some instances made people hungrier.

If you’re going to pay a premium on a product, it must be held up to a higher standard. It you are going to pay $70 for their starter pack when you could get other diet shakes for half the price or less, then this would need to provide results that are at least the same, and preferably much better. That’s not the case here, and instead we’re seeing reviews that make it sound like this is a ripoff rather than a weight loss solution.

Bystrictin is getting our Thumbs Down rating, based on poor user feedback and artificially inflated prices. At the end of the day these are just weight loss shakes, and there are so many to choose from that work as long as you use them appropriately. There’s no reason to spend more money on something that is only shown to provide spotty results. There are also reports that it is not very easy to get your money back from the company in the case of a return. Overall we’re recommending to not go with them.

Our Recommendation
There are other products that use the same idea, but are more reasonably priced and have better feedback from those that have tried it. One of the most recent products to hit the market is the Slimful bars, which are similar to the Fullbar. You eat these bars 30 minutes before a meal and then end up eating less than you would, thereby creating the intake of a thinner person and your body should respond accordingly.

What do you think? Does Bystrictin work or not?

← Previous Does TestoJack 200 Really Work?
⚅ back to blog
Next →Does City Lips Really Give you Fuller Lips in One Month?