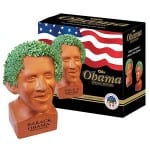 Maybe you are just hearing about the Chia Obama, but it has been around for quite some time now. It is a statuette of President Barack Obama with his hair replaced by a Chia plant. The idea is you start with a bald president, and as the plant grows so does his afro.

Overview
Chia pets have been around for decades and enjoyed surprising success based on their catchy advertising jingle that goes “Ch-Ch-Ch-Chia!”. After their initial success they started coming out with Chia pets in all sorts of variations milking the deal for all it was worth. Every once in a while, they come out with a new way to stick their old plant back in the limelight.

The Claims
There are actually several claims made by the makers of Chia Obama. They claim that it represents hope, and helps to celebrate the commemoration of our 44th president. They also claim that it is a collector’s item. They claim that your simple plant is a symbol of liberty, hope, prosperity, and opportunity. They go on to say that having the Chia Obama in your home makes a statement that says you are proud to be an American.

It is amazing that the announcer was able to keep a straight voice during the recording of the promo.

They also say that all you have to do is spread the seeds, water it, and watch it grow, just like the traditional Chia Pet. In addition, they say that it makes a great gift, but we are not so sure about that one.

The Hype
The Chia Obama has gotten a lot of press because of its controversial nature and as they say all press is good press. It does not matter whether you intend to buy the Chia Obama or not, by drawing attention to itself it is going to make more sales. Many people are familiar with Chia Pets, and were surprised to find out that this is one of their latest creations.

The Cost
Chia Obama cost $20 plus $8 shipping and handling. Because of all the controversy surrounding this, the company obviously saw it fit to come up with other presidential Chia plants so now you can choose between George Washington, Abraham Lincoln, and the Statue of Liberty. Wisely, they did not produce Bill Clinton or George W. Bush Chia pets in order to avoid any other complaints and controversy.

Evaluation
Since Chia Obama is made by the same company that brought you the original Chia pet, you can expect it to work just as well. There are not any complaints about Chia pets and their ability to grow, so the product itself is actually top-notch. Whether or not you want to buy it is another matter, but if you do you can expect the hair to grow, so no worries there.

See, it really does “work”:

It is important to point out that there was never any controversy on whether or not Chia Obama works or not. The controversy was whether or not the product is offensive. If you do not have a problem with it, then it functions like it is supposed to and will look the way it does in the picture when it is in your home.

Our Recommendation
If you are both a fan of President Obama and the original Chia pet why not grab yourself a Chia Obama? It is a pretty good likeness of our 44th president and will definitely be a talking point for any company you have over. If you do not buy into the controversy there is nothing wrong with the product, although we do not know if it is as patriotic as the manufacturer claims.

What do you think? Does Chia Obama work or not?

← Previous Does Pasta Boat Really Work?
⚅ back to blog
Next →Does Dream Look Really Work?