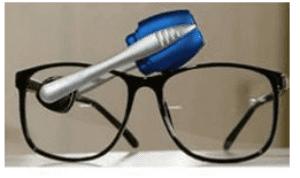 For most who need to wear eye glasses they end up paying a lot of money for them. Then often what is not done with them is proper care. A product that can help with this is Clever Clear.

Overview
Clever Clear is an eyeglass cleaning device that is comprised of Micro fiber pads that are meant to not only clean the lens of your glasses but protect them during the cleaning process.

The Claim
The claim that the promoters of Clever Clear make is that the cleaning fibers used in this device are able to lock onto all the dirt, debris and grime that builds up on the eye glass lenses. The design of the Clever Clear is such that you can get into the corners and contours of the lenses.The brush that is used to clean the lenses is detractable and it is also the charger for the brush which operates on static electricity for pulling the dirt and grime off of the lenses

The Hype
The hype for the Clever Clear revolves around the static electricity being the method used for the dirt and debris removal. Plus the fact that you can recharge the fibers so they will work effectively each time.

The Cost
The cost of the Clever Clear is $14.99plus $4.99 shipping and handling. If you want a second one then you just have to pay for the shipping. The Clever Clear is being promoted as being able to last for up to 500 cleanings. So if you averaged one cleaning per day this would last you way past a year.

Evaluation
We really had to think whether a device like the Clever Clear is really needed or whether this is just a gimmick. We did discover that there are similar products on the market and they have been quite successful in meeting a need. So we are convinced that there is a requirement for the Clever Clear product. We know that micro fibers are a good cleaning item but we also like the fact that the fibers in the Clever Clear can be recharged. This means you are going to get the full benefit of the cleaning properties.

We are going to give Clever Clear a thumbs up rating even though we know this is a new product. It has a use and the concept behind it is a good one.

Our Recommendation
If you are not into new technology such as this with Clever Clear you still need to rely on a good eye glass cleaner so you may want to check out Smitty’s Glass Wax.

What do you think? Does Clever Clear work or not?

← Previous Does the Lasko CD09250 Ceramic Heater Really Work?
⚅ back to blog
Next →Does Boppin Bugz Really Work?