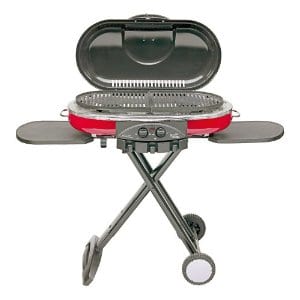 The Coleman Roadtrip Grill LXE is trying to bring the functionality of your home grill on the road with you wherever you might go. It is trying to accomplish something that most grills haven’t done yet: provide powerful performance and propane cooking in a portable grill that doesn’t skimp on size. You are probably familiar with the Coleman name, so it’s really a matter of seeing whether or not this lives up to it.

Overview
When you are getting ready for game time, or the annual family picnic or camping trip you’re faced with a dilemma. The grill on the back deck just wasn’t designed to be moved, and the portable options are few, and leave much to be desired. They’re either too small in size, or they make you use charcoal, which takes forever and means you’ll have to bring lighter fluid and matches with you. What you really want is something that replicates what you’re used to, but fits in the trunk easily and goes where you want it to.

The Claim
Enter the Coleman Roadtrip Grill LXE. They claim that this unit is built to travel. It’s got wheels that allow you to move it where you want it to go, and it folds up easily, and unfolds quickly so it’s ready when you are. It uses propane, so you don’t have to worry about getting charcoal lit when your outdoor event is underway. It’s also built so that you get the same sort of taste that you would from a standard grill.

But what most people enjoy is that no matter what the weather is like outside, even if it’s freezing, you’ll still be able to cook with this and get the same sort of performance you would on a summer’s day. And you won’t need a match to start it, which comes in handy when it’s cold and windy. This makes it great for tailgating, especially when you’re at a game in late November. The other good feature is that even when the propane tank is running low, you will still be able to cook as if it was full, because it uses the same pressure from start to finish.

They also say that you can use this in several different ways by swapping out the cooking surface. Of course they have a grill, but they also have a griddle, or a stovetop attachment, but these are sold as separate items.

The Hype
The Coleman name is synonymous with the outdoors and camping equipment, and they’ve built themselves a solid reputation when it comes to quality products that are built to last. From the feedback it has received, it seems they’ve done it again here.

The Cost
Coleman Roadtrip Grill LXE is around $170, and if you want to go with all of its attachments you can end up spending an extra $100 or so. But it works just fine by itself, so you don’t need any upgrades unless you really want them.

The Commitment
Depending on what you currently use to grill your foods when you’re out and about, this will probably represent a reduction in how much time it takes to get everything set up, and get started cooking. If you’re used to a charcoal-based grill, then you’ll definitely see an improvement in going from zero to having the burgers cooking. We’re all familiar with the advantages of using propane over charcoal, mostly because you don’t have to wait for the coals to get hot, or drench them with lighter fluid.

Evaluation
This is the best-reviewed travel-friendly grills we’ve ever evaluated. The Coleman Roadtrip Grill LXE has tons of people saying that it’s easy to assemble, and that it cooks just as well as the big boys. One of the features that keeps getting brought up again and again is that you are not giving up any size when using this, and it dwarfs other grills that are trying to provide the same sort of features in an portable grill.

If you thought you were going to have to sacrifice power for versatility, you’d be wrong because this has two 10,000 BTU burners, so you’ll be happy to know that you’re still getting a high-performance grill here. This grill gets really hot and will have your picnicking or tailgating fare done faster than you might be used to with conventional methods.

We like that they’ve included a grease tray on this, which makes clean up easier, and allows you to cook healthier foods by allowing the grease to drip off of it similar to a George Foreman grill.

The Coleman Roadtrip Grill LXE is likely to win you the Best Tailgating Buddy award at the next big game. Its sturdy construction means you’ll be able to use this for several seasons to come, so you’ll be sure to get your money’s worth out of it. One other good feature is that it stores easily when not in use, so you can tuck it neatly in an open spot in the garage or shed, and you won’t have it getting in the way when you’re trying to get to another item or get things done.

Our Recommendation
The name says it all, and if you’re one that loves a good road trip – and who doesn’t? – grab this and you won’t regret it. You’ll thank yourself when you bite into your first juicy burger that tastes just as if you cooked it in the backyard.

What do you think? Does Coleman Roadtrip Grill LXE work or not?