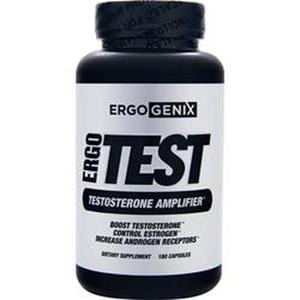 ERGOTEST is a testosterone supplement that says it’s different than the others, and that even though science has debunked testosterone boosters, theirs is one that is actually proven. So let’s delve deeper into their claims for the real story.

Overview
Ever since AbbVie started running a promo to raise awareness for low testosterone, with a campaign that tells people to go to their website to find out “Is it Low T?”, more and more guys have started to question whether their symptoms can be attributed to low testosterone levels. Since many of the symptoms seem to correlate with getting older, many men just assumed it was natural to have less energy and a lower sex drive. The point of medications and testosterone boosters is to get the testosterone back to adequate levels, and the theory is that these symptoms will diminish or disappear.

The Claim
ErgoGenix, the makers of ERGOTEST, say that their product holds up under scrutiny, and takes a different approach than other testosterone products out there, typically referred to as testosterone “boosters”. They say that it will allow you to have more pump when lifting in the gym, and will improve your sex life as well, getting your libido back to a more natural state.

They say that bulbine natalensis extract is the difference maker here, and is why their product works while others may have let you down. The end result is that they claim you’ll get more testosterone, with less of a boost in your estrogen levels, engage more androgen receptors, and have an improved sexual experience. Sign me up right?

The Hype
The hype surrounding all testosterone products is that they promise to relieve men of many of the common problems they experience as they age. It’s easy to think that if you just get your male hormones back where they should be, all of the masculine things guys are known for should correct themselves.

The Cost
A 60-serving bottle of ERGOTEST is $50 at their main site. You can also get a 30-day supply for $44 delivered to your door through Amazon. Overall that is pretty much standard when it comes to testosterone products. There seems to be a premium on them, and they are in their own price category and shouldn’t be compared to other bodybuilding or men-only products.

The Commitment
You will need to take 3 pills twice a day while on this, and they say you can take it for up to two months, and then they recommend taking a month off so that it doesn’t build up in your system to the point of your body getting used to it. Of course if you are hoping that this will increase your muscle mass and size you’ll need to head to the gym and see if you’re able to lift more than you could without it. And if you’re looking for improvement in the bedroom you’re going to have to get a few sessions in after taking it to see if there is any improvement. We call that field testing.

Evaluation
ERgoGenix products typically fare well when it comes to user feedback, and ERGOTEST keeps the streak alive. While there isn’t a ton of data on whether it does what it says, users do say that it helps, although it might not be a miracle in a bottle that some might be expecting. As long as you realize that this is one tool of many that you could be using to help get the results you want, you should be OK. It is those that think this is the only thing they’ll need to take for a total turnaround that end up disappointed. They clearly state that you can stack ERGOTEST, which means they’re expecting you to use it in conjunction with other products.

It’s hard to tell whether the results people are getting are indeed from ErgoTest or if they are from a combination of it and other supplements. Most bodybuilders are taking multiple products at once making it hard to tell what is the cause for improvement. That’s why it’s important not to put too much stock in any one person’s experience, because there are simply too many unknowns which makes it risky to follow their recommendation. What you really want to see is a large sample of users that are only using this product to gauge if it really does anything. Barring that we’re doing the best we can with the data that is available.

ERGOTEST is getting our Solid Try rating due to the feedback it gets, the price point, and the ingredients used. Taking a different approach to the testosterone riddle is key here, and it’s nice to see that they didn’t simply do what every other company does and hope for different results. With the reputation they’ve built up over the years, it seems like one of the few testosterone products worth testing out to see how you respond personally.

Our Recommendation
It’s important to determine whether you really do have low testosterone levels or not before embarking on any new product that promises an increase. It could be that the symptoms you’re having are not because of low levels, and you would be ramping them up unnecessarily. After being told by a doctor that you do indeed have low T, then you can start to consider your different options, this being one of them.

What do you think? Does ERGOTEST or not?

← Previous Does Garnier BB Cream Really Work?
⚅ back to blog
Next →Does the Karcher Pressure Washer Really Work?