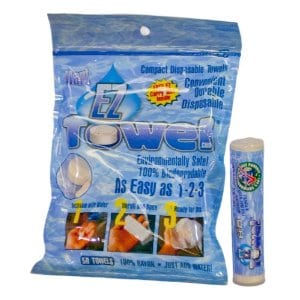 Sometimes you just need a towel when there isn’t one around, and that’s where EZ Towels jump in. They’re a pretty simple concept, instead of wet naps you only have to carry around a small, quarter-sized disc until you’re ready to use it. But what sort of quality are we talking here, and is this something you should buy, or take a pass on?

Overview
These are little tablets that are actually towels, sort of a cross between wet wipes, gauze, and a really strong paper towel. They are dry and compacted, and if you just add a bit of water they are ready to unroll and get to work. You can use them in just about any situation where you could use a wet towel, either to wash your hands, your face, clean up a mess, or clean something off.

The Claim
They say these are convenient, and it’s hard to argue with that. They can go almost anywhere as long as you keep them dry until you’re ready to use them. They could fit in a pocket or purse, and you could toss a handful of them in a plastic baggie if you’re going on a road trip or other excursion.

They also say that they’re durable, which is good when it comes to a hand towel, because you don’t want something coming apart in your hands and making the mess worse. These seem to be of an actual fabric once you unravel them, and

They are also disposable so you don’t have to worry about carrying them around with you once you use them on something gross. Just toss it in the trash, and the next time you need one just add water and expand it and you’re set.

The Hype
EZ Towels are gaining in popularity, and there’s actually a buzz about how well they work. It may seem silly for people to get excited over a disposable towel, but there really isn’t anything else like it on the market so it definitely has some novelty to it.

The Cost
EZ Towels packs are pretty cheap, and you can even get a free sample pack to try them out before you buy them. Right now they are just $10 for a pack of 50, or just 20 cents each.

Evaluation
We were a little skeptical about the thought of carrying around a Mentos-shaped tube of towels around, but we have to admit they are a high quality product. Our first thought was why wouldn’t you want to just have some handi-wipes on hand. But those can be bulky to carry around, and sometimes they are too wet, and the fragrant smell is something you don’t want in some situations.

This is one of those things where you just buy a bunch of them and have them around just in case. At $10 you really can’t go wrong. The worst thing that will happen is you don’t use them very much and you’re out the $10. Best case scenario you find lots of reasons to use them and they become part of your life. At that point you just order more when you run out.

It’s a very simple product with a simple premise. A disposable wet nap that you just add water to. They definitely work, and depending on what your hobbies are and lifestyle is, you’ll find them useful or not. For moms these are a must to have around, and are a great alternative to wet wipes. If you like to camp, take a pack of these along and you’ll be surprised how often you use them.

If you don’t think you’ll get much use out of them, take a pass on it, but really at this price point it just makes sense to give them a try. There’s really no down side to getting them. Life is messy and it’s nice to have something to clean it up in a jiffy.

Our Recommendation
A pack of EZ Towels is a good thing to keep handy. You may not even realize you need one, but when you have them around you’ll be like “Oh, great, I’ve got just the thing for this.”

What do you think? Do EZ Towels work or not?

← Previous Does the Halo Oven Really Work?
⚅ back to blog
Next →Do Juicebar Solar Chargers Really Work?