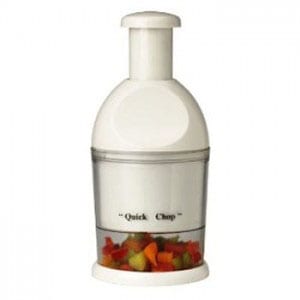 The Gourmet Quick Chop tries to sell you on the idea of being that go-to kitchen gadget that can take the drudgery out of your cooking. By removing the need to chop, mince, and dice the old fashioned way it says you can get back to the more skillful parts of being a chef, or you can simply have the food you want more quickly and with less effort. So how well does it really work? We tested it out and have the video to prove it.

Overview
Cutting things up into little bits using an ordinary chef’s knife can be very tedious, and is one of the least favorite activities of most chefs and cooks. Since you can’t really tell the difference between a pile of diced tomatoes that were cut by hand, or that were done in a machine, it sort of takes out the motivation to do it the old fashioned way. You won’t be winning any style points, so it’s best just to get the job done as quickly and easily as you can.

The Claim
The makers of the Quick Chop say that you can do all sorts of things with it, and with only a tap. They say that you can mince, slice, and dice up fruits, vegetables, and other foods that normally take forever. Some of the things they say you can make with it are salsas, home fries, and fruit salads. They say that it can save you from having to bring out your big food processor for smaller jobs, saving you set up and clean up time as well.

They say that it is faster than using a knife, and that all you have to do is put your veggies under it and with a few taps you’ll have shredded it up nicely. You could shred cabbage for use in Cole slaw, or chop up vegetables for a stir fry. They also mention that you can use it to mince garlic and it will also peel it for you. They say that these are no ordinary blades it uses, but that they’re made of carbon steel. The inventive part comes by rotating the blades so you don’t have to rotate your wrist. You just tap and the unit does the rotating so your food doesn’t stand a chance.

They say that clean up is easy as well, you just rinse it off under your faucet and it’s ready to go again. One final claim they make is that it can crush ice.

The Hype
With Billy Mays as your pitchman you don’t need any extra hype. The product was so successful that it even spawned a well known imitator in the Slap Chop, pitched by Vince Offer.

The Cost
The Quick Chop can be found for around $17 online. The originally TV offer had it at $20 plus shipping so it’s come down in price over the years, but is still the same piece of equipment.

The Commitment
This isn’t going to take away all your cutting woes, as it does have its limits. The pieces need to be cut up enough beforehand so that you don’t end up jamming the machine. However, when you compare this to the wris-aching process of cutting things up with a knife, or using a food processor that is overkill, there is a definite reduction in your commitment level.

Evaluation
Gourmet Quick Chop excels at making salsa, and if you get it for this feature alone you might be pretty happy. It’s a handy thing to have around the kitchen and will prevent you from having to do the mind-numbing task of dicing and mincing, or even chopping to some extent. The reason it doesn’t work so well at chopping is that you have to get the pieces down to a manageable size for it anyway, so a few extra chops and you can avoid using it altogether.

After testing it out and using it for some time now, we’re pretty pleased with it and consider it a good buy. You probably won’t use it every day, or for every single instance and example they show in their infomercial, but that’s OK, because the things that it is good at it’s really good at, and it only takes a little bit of trial and error to determine what you should be using it for.

The Gourmet Quick Chop gets our Thumbs Up for things like salsa and other toppings, but try not to think that this is going to solve all of your kitchen troubles. It does a great job once you get the food into sizable pieces that it can handle, but it can take a good amount of time to get everything just right for it. Overall, we’re recommending it as a time saver, especially if you have a few tasks in mind for it already.

Our Recommendation
It’s similar to the Slap Chop, so it’s up to you whether you want to support Billy Mays or Vince Offer, both of infomercial fame. Billy Mays actually claimed that Vince stole the concept, and tried to steal some of the Quick Chop’s thunder. The two spokesmen had a pretty good rivalry going for a while. A lot of side-by-side testing has been done to see if one performs better than the other, and many of the results show them producing nearly identical foods.

What do you think? Does Gourmet Quick Chop work or not?

← Previous Does Super African Mango Really Work?
⚅ back to blog
Next →Does PureSleep Really Work?

7 Customer Reviews on “Does the Gourmet Quick Chop Really Work?”