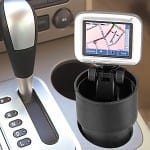 If you’ve ever mounted your GPS device in your dashboard, you’ve probably hoped someone would invent something like GPS Pal. It basically takes any GPS system and lets you mount it in your cup holder. At first it looks like a novel idea, but after you consider it for about 30 seconds you will realize that it’s got a glaring design flaw.

Overview
GPS devices are great, and they make getting lots a lot harder when they give you accurate, satellite-based directions from point A to point B. However, unless you have a high-end vehicle with a built in navigation system, you’ll have to get a third party unit and mount it somewhere on your dashboard, usually suctioning it to the windshield to keep it in place.

The Claim
The makers of GPS Pal claim that their product will save you from all of the lousy parts of owning an on-dash GPS device like those made by TomTom or Garmin. Most people have some experience with a GPS device coming undone from its suction and flopping around the car, distracting the driver and causing a potential hazard.

The only problem is that they’ve solved one dilemma and caused another. If everyone starts looking down at a cup holder mounted GPS then they are taking their eyes off the road and causing potential accidents.

The Hype
They exaggerate just how inconvenient a GPS unit is on the dashboard. It’s not as if it obstructs your view so much, or comes off as often as they depict. Yes, it has some problems but not to the extent that you’d want to mount in down by your lap.

In the infomercial they show what must be a moron mounting their GPS unit directly in the center of the windshield. They also show a model of a car that has its cup holders up by the air vents. Most cars have their cup holders down by the cigarette lighter and glove compartment, which is far from ideal.

The Cost
GPS Pal is modestly priced at $20 and this is perhaps due to a few reasons. Most people will part with twenty bucks and not ask for a refund after they try it out and realize they’ve been duped into looking down at their cup holder whenever they need to confirm a turn. Also, they probably realized that the product had a short shelf life from the time it came out to the time it got bashing reviews like this one, and they just wanted to sell as many as they could while they could.

And last, it’s mostly just a plastic cup with a few enhancements, so they can’t charge more than $20 because that’s all the market will bear. Additionally, it’s somewhat overpriced for what it is, and is worth maybe $10 not $20.

The Commitment
Once you have your GPS snugly in place, you simply continue to use it as normal, without having to worry about it coming loose, or having a potential thief try to steal it.

Evaluation
The only problem with putting a GPS device in a cup holder is that it takes your eyes of the road and down by your gear shifter. This is why they’re meant to be on the dash, so you can quickly look at it, get an idea of what you need to do, and then listen to the voice prompts to move along your path.

While the cup holder idea seems novel, it’s not really a recommended place for your GPS unit. It would be a good place to put a cell phone mount, with speakerphone enabled, but not something that you have to look at visually from time to time.

Sure, GPS Pal works, it holds your GPS device securely and it won’t go flying all across your dashboard when taking a sharp turn or braking suddenly. But the location of your cup holder is less than ideal, and makes using your GPS device a dangerous proposition, rather than something that will help you get to your destination more easily.

Our Recommendation
Do not get GPS Pal. It’s potentially hazardous to your driving and puts a GPS unit in a place that it’s not meant to be.

What do you think? Does GPS Pal really work?