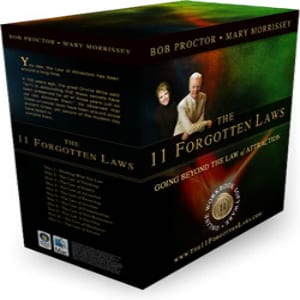 You might recognize the host of the The 11 Forgotten Laws, Bob Proctor, as the first guru that was shown at the beginning of The Secret, and revealed that “the secret is the law of attraction”. So who more fitting that to give the 11 laws that were apparently forgotten when they produced The Secret video? But does this give you the missing elements that were left out of the secret, or will it leave you wanting to know more?

Overview
Bob Proctor has been in the self-help game for a long time now, and has written many books that are best-sellers. He’s a very charismatic guy, and when he says something it just sounds good, the way Morgan Freeman is always used to narrate documentaries. He is actually a pretty good teacher, if you like his teaching and speaking style. If you don’t really like the sound of his voice, then you won’t like this course to much, because it’s mostly audio based.

The Claim
The 11 Forgotten Laws says that it contains the “other laws” that The Secret left out, and that with all of the laws in your possession you’ll finally have what you need in order to get what you want. The thing about the claims made by both this and The Secret is that it says you can have basically anything you want, and that your life will improve in all areas once you get the information. It’s a general and wide-sweeping claim, and the kind that gets people excited because it speaks to the soul. Who wouldn’t want whatever they want?

The Hype
The hype is that this is directly related to The Secret and references the fact that The Secret hasn’t really helped many people, as evidenced by the economic decline and continued hardship being experienced by millions of Americans. The Secret was hugely successful at its peak, but has since been made a villain because people didn’t get results. So the 11 Laws is getting some of that backlash, trying to sidestep it and use it as fuel to get you to buy by saying that this program fixes the reason the first one didn’t work.

The Cost
The entire 11 Forgotten Laws program is $97 and comes with a 60 day money back guarantee. It’s just one payment and does not enroll you in any sort of monthly membership. This is really not a bad price, considering all that you’re getting, and all that it can help you with in your life.

The Commitment
You should approach this as you would if you were taking a college course for credit. It shouldn’t be idly listened to and then forgotten… You should study it the way you would study something that was very important. Treat the audio portions like a lecture. Be actively involved in taking notes, rewinding and listening to parts again if you zone out. Try to put this into practice each day as you learn a little bit more. If you don’t throw yourself into this, you won’t end up learning anything and you’ll walk away from it thinking that it doesn’t work.

Evaluation
The problem with The 11 Forgotten Laws is the same problem that The Secret had: it’s really just an introduction to things, and not really an in depth course on how to manifest things into your life. This is because it is tailored to make money, and get you to keep buying more related products. If you want proof just look at Rhonda Byrne, who keeps releasing book after book that are follow ups to The Secret. This is because she keeps introducing concepts, but doesn’t provide a fully developed course that teaches you how to master them.

Don’t Get Confused
The Law of Attraction and The Secret are not synonyms. The Secret is just a repackaging of The Law of Attraction. The Law of Attraction works, it can’t not, just like the law of gravity works. It’s working right now. The Secret doesn’t work as a program because it left out a lot of information and skimmed over some very important things so that when people tried to use in their own lives they were met with mediocre results in most cases, and then got frustrated and gave up. Those that got inspired to learn more and delve deeper ended up getting better results.

The 11 Forgotten Laws is a good addition to The Secret, and will help you explore some related topics more closely. It might also get you motivated to learn more about how the Law of Attraction works, and what you can do to make it work for you.

However, it will probably leave you wanting to know more about each of these 11 laws, much the same way The Secret left things open-ended. There’s just too much to go into, it will spread your thinking too thin, and you’ll wind up a Jack of all trades, and still unable to master the Law of Attraction and get what you want.

Our Recommendation
Whatever you do, don’t get fooled by some of the other “reviews” out there that say this worked, and it worked for them. These are mostly thinly veiled affiliate sites that will basically tell you anything to get you to buy. The simple fact is that Bob Proctor genuinely wants to teach you about the Law of Attraction and all of its elements, so give it your best shot and if you either don’t have the time for it, or if your learning style is not conducive to it, get a refund and find other ways to learn more. Don’t let anything stop you on your quest for knowledge.

What do you think? Does The 11 Forgotten Laws work or not?

Customer Review on “Does The 11 Forgotten Laws Really Work?”