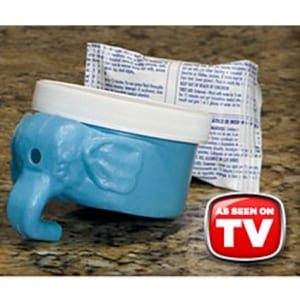 The Little Blue Elephant is a way to keep your toilet clean without actually having to scrub it. The thought of never cleaning your toilet again is a very strong motivating factor, but you probably want to know if it’s going to work or not before trying it out. There have been a lot products claiming to keep your toilet ever-clean, and many of them fall short. So let’s look at what makes this one different, and see if it really does in fact work.

Overview
Cleaning the toilet is probably one of the worst jobs in the house, not just because it’s pretty disgusting, but also because it’s thankless. Your family just expects to be able to sit down on a clean toilet, and doesn’t really think too much about how it gets that way. Deep down they’re probably thankful, because they realize that they’re not the one that is having to clean it, or maybe you delegate the task in a sort of rotation so that everybody gets taste of the unpleasant chore, which builds appreciation.

The Claim
The Little Blue Elephant uses an innovative system which bypasses the tank that sits behind your toilet, and goes right into the refill reservoir so that it doesn’t waste any cleaning product, and sends the cleaning agent right into the bowl, not just down the drain. They claim that it is totally safe for all of the different kinds of plumbing and toilets, as well as septic systems.

They have it set up so that you don’t have to touch the chemicals, which is a good thing because it uses chlorine to keep your toilet clean. You simply cut off a corner of the packet and place it in the elephant’s body. Then you close the lid on it and place it strategically in the back of the toilet. When the toilet flushes, fresh water gets passed through the elephant, mixes with the chemical solution, and makes its way into your toilet bowl.

The Hype
Anything that promises that you won’t have to clean your toilet any more is going to receive its fair share of hype. Several products have gotten a lot of initial attention for making this claim, but they also have a flawed execution, which has left people still wanting something that actually works.

The Cost
The Little Blue Elephant is sold on a 2-for-1 just pay shipping offer, but they’ve lowered the price of the additional shipping, which is nice because with something like this most families with multiple bathrooms will want to order two of them. The total cost comes to $33 for two of them.

The Commitment
Installing this is easy enough, and doesn’t require that you touch any of the toilet water or use any tools. You turn the water supply off, and flush the toilet so the tank is empty. Then you hook the elephant’s nose onto the refill valve as shown, and put the tube into the hole on his head. After that it runs on its own each time the toilet flushes.

Overall this should represent a reduction in the time you spend cleaning your toilet. You will be able to clean it less often, how infrequently will be up to you. But it should get dirty far less than it used to. Also, it doesn’t clean the outside of the toilet or the seat, so you’ll want to keep up with those, but as far as the inside goes, you should be all set for weeks at a time.

Evaluation
When you consider that The Little Blue Elephant isn’t wasting a bunch of chemicals by flushing them down the toilet, it’s a much better idea than putting a cleaning product in the actual tank. That way only the water that comes in to refill the bowl is used. They did make a tall order for themselves by saying that you’d never have to scrub your toilet again, and we’re not so sure that’s true. You’ll probably want to give it the once over every now and then, but it should make it so you don’t dread the task, and definitely won’t have to do it as often.

They get bonus points for the clever design, as well as coming up with the idea of bypassing the tank and just using the refill reservoir to distribute the cleaning solution. It is a really smart and innovate idea that is unlike anything else on the market right now.

They have executed really well with the The Little Blue Elephant, and it’s getting our Thumbs Up. The concept is nothing new, companies have been trying to come up with a way to keep your toilet clean for decades. They might have figured it out with this little gadget, and making it elephant shaped just adds to the appeal. Why not make it fun if you can?

Our Recommendation
Get this if you want a cleaner toilet on a daily basis. You’ll probably have to scrub your toilet every now and then, but knowing that it’s being cleaned with each flush between scrubbings gives you some peace of mind. And when you do go to clean your toilet, you won’t have to scrub very hard in order to get it looking pristine. At this price it’s a great way to save you some time, and can be one less thing you have to do on your cleaning regimen.

What do you think? Does The Little Blue Elephant work or not?

← Previous Does Salad Chef Really Work?
⚅ back to blog
Next →Does Glucosulin Really Work?

10 Customer Reviews on “Does The Little Blue Elephant Really Work?”