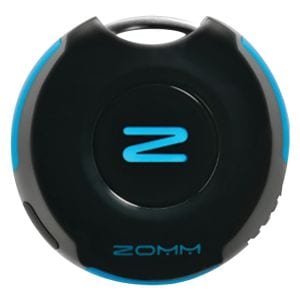 When you first look at a Zomm it is kind of hard to figure out exactly what they are trying to sell you. It looks like a little gadget that you could keep on your keychain, but when you start hearing all of the features it has, you may think it has an identity crisis. It’s a “wireless leash”, a concierge, a emergency services dialer, and an alert so you don’t lose your phone, all wrapped up into one. So how well does it perform?

Overview
There’s a virtue in living life simply, and technology is supposed to help us do that, in theory. But it seems like we’re going through a phase where more and more technological products are coming out to make our lives more complicated. It’s bad enough we have to be on our smartphones multiple times throughout the day, and heaven forbid if we should walk away from our phone at any time. Eventually the pendulum should swing the other way as smartphones start to incorporate more of these peripheral features and the need to carry around multiple gadgets is eliminated.

The Claim
Zomm claims that their devices can be used in a multitude of ways: as a speaker phone, as an emergency calling device, as an alarm in case you’re about to forget your phone, and as a concierge for anything you can dream up. It is interesting that there are so many features, and they seem to be spread out over three or four different products.

The Hype
It’s a gadget, and gadgets have a long history of finding a place in people’s hearts, as well as their hands. There’s just something about a small device that can do cool stuff that gives it that instant hype to it. In this instance it’s being lauded as a great way for smartphone addicts to make sure they never lose their phone again. For some this might not seem like a big deal, but others will like that they don’t have to have that sinking feeling of leaving their phone behind in a bar, club, or coffee shop.

The Cost
Zomm comes in a few different varieties, depending on what you need it for. They have their Wireless Leash and Wireless Leash Plus that are designed to alert you when your separated from your phone, and can also call 911 with your location. These start out at $90. Their concierge service is $15 a month.

Then there’s the Lifestyle connect which is currently under development that is bringing even more features and supposed benefits to the table. It will be interesting to see what price point that comes out at, and how it is received by users.

The Commitment
Once this is set up, there’s not too much commitment on your end, and it should actually save you some time and expense from losing your phone. They’d like to say that it might even end up saving your life if you end up using it to summon emergency services. And if you take them up on their concierge service you could make your life a little easier by outsourcing mundane tasks

Evaluation
The term wireless leash is a funny one because it makes you wonder who’s on which end of the leash. If you’ve become dependent on your phone, it could be considered the master and you’re the one on the leash. But enough of this Tyler Durden style rant, let’s see what people think of this and whether or not you should grab one. The mixed reviews speak loudly for this gadget, making it a virtual coin flip as to whether you’ll like it or not. You just have to use your own judgement and decide if it’s something you’d find useful.

One of the most damning critiques of Zomm is that it is an overpriced speakerphone that simply sounds an alarm when it loses its connection with the phone. The overall consensus is that this started off with a good concept, but the execution is wrong. Many people praise its design, and like the idea of what it is supposed to do, they just don’t like the way it does it.

The Zomm caters to a very specific audience and if you find yourself nodding along with all of the claims then it might be for you. Just consider that several people have pointed out some major flaws with the design and concept, so be sure you understand that the Zomm doesn’t play well with other devices. For example, if you currently use a Bluetooth headset the Zomm will boot it off and force you to use its speakerphone feature instead. Also, there have been several accounts of the alarm going off at odd times and for no apparent reason. It might be a better idea to wait until the release of Zomm 2.0 if they make it that far.

Our Recommendation
The really good gadgets out there don’t need a lot of explanation as to why you’d want them – you just know in your gut that you have to have it. Zomm tries to write this off as just being so avante garde that it takes a lot of explaining as to why you’d need it. Judging by this fact alone, this is probably not the killer app they’re trying to frame it as, and it will likely end up being a take it or leave it little toy that you end up forgetting about from time to time.

What do you think? Does Zomm work or not?

← Previous Do EZ Covers Really Work?
⚅ back to blog
Next →Does the Mighty Light Really Work?