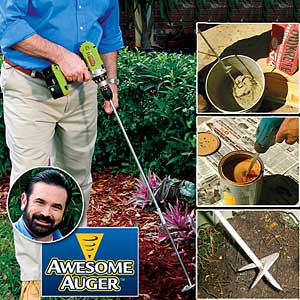 Awesome Auger is just one of the many products on the list of Billy Mays promotions. That guy could sell anything, and most of the time he got it right. He did endorse a few flops, so let’s find out if Awesome Auger is one of them, or if he gets a passing grade.

Overview
Gardening is a hobby enjoyed by many people, but it does have its fair share of tasks that are less than desirable. One of these is creating the holes that you plant your flowers and other plants in. If you live in an area where the soil is not very forgiving, it can be hard breaking through rocks and clay in preparing the soil for your new additions. A lot of the tools out there seem to be overkill, or not enough. Awesome Auger hopes to fill that middle void.

The Claim
The folks at Awesome Auger claim that you can plant twice as many flowers, shrubs, and other plants in half the time. It allows you to dig holes with ease, and get back to the more fun aspects of gardening. You won’t have to struggle with hard soil and clay, and it can even cut through the thickest of roots so you won’t have to fight your way through those anymore. If you’re into some hard rocks or stumps it’s meant to take care of those as well.

Best of all this is all supposed to happen with no bending or backaches on your part, as well as no blisters from all of the repeated feeding incline. They say it attaches to any drill that you may own and I have to do is pull the trigger and get back to your planting.

The Hype
There’s a bit of hype involved with any product pitched by Billy Mays. It seems that just by him shouting the features and benefits to you a product just seems to be good quality. He also had a way of making things look easy, and provided some rock solid reasons and visuals compelling you to buy.

The Cost
You can find Awesome Auger for less than $30 and many online retailers, or you can go to the official site to receive the bonuses and promotional pricing. Many complaints filed in people that claim to have been overcharged by using the main site to place their order. Always be sure to double check what you’re ordering, and review the terms and conditions to make sure you’re familiar with what you’re paying and what you’re receiving.

The Commitment
the Awesome Auger is supposed to help relieve you from many of the tedious tasks related to gardening. With its different attachments you can do all sorts of things that used to take all the time and effort. If you find that you enjoy gardening, then this should dovetail nicely into your regular routine. If you’re hoping to do more outdoor activities once you buy the Awesome Auger, you might want to start doing them first and then come back and purchase once you’ve established the habit.

What People Are Saying
One of the complaints about the Awesome Auger is that you can use it from an upright Position the Way, Billy Mays is shown to in the commercials. You still have to stoop over in order to use it, creating the same sort of backaches and strain that caused you to buy it in the first place.

If you end up buying the one that comes with its own drill, the complaint is that the drill is too weak to do anything with. If you buy just the attachment, there have been complaints that the welding is not right which makes it highly ineffective.

There are some people out there that have been happy with the purchase, and claim that the Awesome Auger has helped them with their gardening tasks and they are happy that they bought it. It seems to make a big difference which drill you use, and if you own a nice drill that’s powerful, the Awesome Auger seems to work as depicted.

Our Recommendation
Take a pass on the Awesome Auger, and apply your money towards a similar product that may cost a little more but that is better built. The concept is simple enough, and there is more than one product available for you to buy some don’t get pigeonholed into thinking you have to buy an Awesome Auger.

What do you think? Does the Awesome Auger work or not?

← Previous Do Martial Arts Really Work?
⚅ back to blog
Next →Does Meditation Really Work?