How to Hard Boil an Egg Perfectly with an Egg Cooker 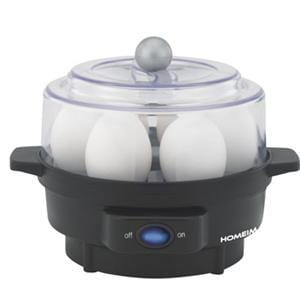 Getting a good batch of hard boiled eggs is a tedious task, but luckily an egg cooker can make it a bit easier. The old way of doing it required a lot of boring babysitting of a pot, and even with a timer could be tricky business. You had to wait for the water to boil, then cook the eggs and stop them at just the right time. Then you had to fish them out of the water, and wait for them to cool long enough so you could peel them. What a hassle!

Kitchen gadget companies are hard at work cracking the shell of the hard boiled egg dilemma. They’re doing a pretty good job so far, addressing all of the complaints people typically have with the egg making process, and figuring out a solution for each one. Aside from cooking the eggs, people hate peeling them, finding bits of eggshell still left on the egg, and having an egg that’s not cooked all the way through, or cooked too long so it’s all dried out.

There are plenty of different cookers out there, and each uses their own method of getting the eggs just right. Some are better than others at getting the results that you seek. We’ve done our level best of separating the good from the bad here, and present a brief rundown of the different products, as well as more in-depth reviews just a click away. Our recommendation is to find a few that catch your eye, and then go into further detail to make a final decision.

And don’t miss our guide on how to hard boil an egg perfectly, just below our review recaps. 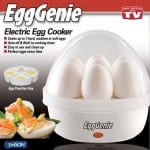 Egg Genie Recap
The Egg Genie is a countertop egg cooker that is designed to give you perfectly cooked eggs and avoid the stove top altogether. We were so intrigued by this premise that we bought one and tested it out. We were surprised to find that it works, and works well. Just to be sure we kept testing it out, and sure enough it produces high quality results each time.

This is a product that lets you cook 7 eggs at once and lets you choose which style you want, hard or soft boiled, as well as poached. It’s a great buy for the price, and for the performance. 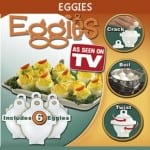 Eggies Recap
Eggies are little plastic “shells” that you crack a raw egg into and then drop in boiling water. The end result is hard boiled eggs cooked the old fashioned way, but without the need to take them out of their shell. If you’ve ever gotten a piece of eggshell caught under your fingernails as you try to peel them, you’ll appreciate this.

They may not retain their oval shape, but the idea is solid, and you do get great tasting eggs from it. You are limited to just making hard boiled eggs, and it is not as set and forget as some of the other models on this page.

See our full review of Eggies 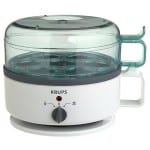 Krups Egg Cooker Recap
Krups put together a pretty good egg cooker here, and if you’re big into hard boiled eggs, like your egg salad, or are on a low carb diet, this is a good one to go with. A lot of times you may find yourself not cooking eggs because of the hassle involved. You may find yourself cooking them more often when it’s easier.

After all, eggs are a healthy food when consumed in small quantities daily, and they’re easy on the budget as well, providing the substance for a meal at a low cost. So it would be good to start cooking them more often, with more ease. 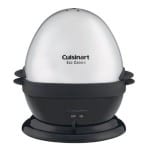 Cuisinart Egg Cooker Recap
Cuisinart gets style points for their egg cooker. It looks like a big egg dome, and popping off the top reveals where the magic happens. If you’re looking for something that will look great on your counter top, this would be the one to go with. You could leave it out, even when you have company coming over, and it might even turn into a conversation topic.

It’s not just a pretty face, the results are there as well and you can expect a nicely cooked batch of eggs each time you use it. This is a company that’s been around for a while making quality kitchen gadgets. 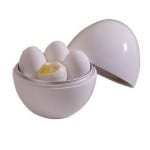 Nordic Ware Microwave Egg Boiler Recap
Nordic Ware attempts to use the microwave to get the same sort of results you would from using the stove top method. This has its own inherent problems of nuking food. Regardless of whether or not eating microwaved foods causes any abnormalities, it definitely destroys the nutritional value of foods, leaving them devoid of any nutrients, especially when left in there for longer periods.

It only makes four eggs at a time, and explosions are not uncommon, so be careful with this one if you end up getting it. Consensus is that it does actually work.

Chef’s Choice 810 Gourmet Egg Cooker Recap
The overall verdict on this gourmet cooker by Chef’s Choice is still being determined. At present it seems like it’s a good choice, but there are too many differing opinions, so it’s probably best to go with a competing product that gets more favorable feedback.

Or you can go ahead with it. It’s got an attractive price and there is enough positive feedback to give us reason to believe that it wouldn’t disappoint. But our recommendation is to get one of the others, we’ve tested them out directly and can vouch for their effectiveness. 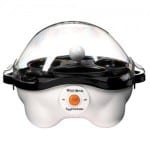 West Bend Automatic Egg Cooker Recap
This is one of the pricier models around, which doesn’t necessarily translate into a better experience. In this case there are many people saying that it broke on them after a few uses, and others saying it gives mixed results even when it’s functioning at full capacity. With so many egg cookers to choose from, it only makes sense to pick one that costs less and works better.

This is an unfortunate entry from a company that is typically known for producing good products. Maybe they just rushed this one to market, but whatever the case there are ones that have been tested and shown to work, so it’s best to go with those.

How to Hard Boil an Egg Perfectly

Eggs used to be such a troublesome food to cook that they have a time named after them. Luckily, an egg cooker takes out a lot of the guesswork and precision when it comes to making hard boiled eggs perfectly, and means that you don’t have to sit idly by and wait for them to be done. Most at-home chefs find themselves attending to other things in the kitchen while the eggs mind themselves.

The first step is choosing which egg cooker you’re going to go with. They each have slightly different instructions, and you’ll want to follow them to the letter. The beauty is that you don’t have to babysit them any more, as they all include a shut off timer so you can set them and forget them and not worry about over or under-cooking them.

Most instructions will have you poke a small hole in the egg to assure that they are cooked right, so be sure not to forget this step when you are cooking them, because it will make a big difference in how your eggs come out. But other than that, there’s not really much you need to do anymore. All of the products mentioned above have an easy to read water level so you know just how much water to put it, and it’s easy enough to determine where the eggs go, they usually have their allotted spots.

The Shells!
The best way to get rid of the shells is before you cook the eggs. That’s what Eggies claim and they win the battle for easiest egg to peel. However, if you’re opting for a all-in-one countertop model then you will still need to battle it out with those pesky shells. They should come off easier than you’re used to, especially if you’re following the directions, and if they come with an egg needle so you can poke a small hole into them before you cook them.

This should allow them to cook better, and the shells should slide right off of them. The reason shells like to stick to eggs is usually because the eggs were overcooked. This dries up the membrane inside and fuses the two together. By properly cooking the egg, a thin membrane should be left intact so that the shell is not directly stuck to the egg, and the whole thing comes off with little fuss, and all of the egg left behind.

For the Health of It
The great egg debate still rages on, with most people now understanding that eggs are good for you, when consumed in reasonable daily quantities. But there is still some confusion as to whether the yolk is good for you, or is the cause of too many problems. Some say that all the nutrients in eggs come from the yolks, while others hold to the idea that all of the fat and cholesterol in eggs are in the yolks, and stick to eating just egg whites.

It’s really up to you to decide, because there’s so many differing opinions. Some say it’s like eating an entire animal, and really it is. If you think we were meant to be carnivores this sounds like a good thing. But there are those that hold that eggs are not good for your health at all, and should never be eaten. There is a lot of information to digest when it comes to eggs, and unfortunately no easy answers. If you enjoy the taste, and feel better when you eat them, we’d say that makes them alright to eat in moderation each day.

The egg cooker you go with is ultimately up to you and what sort of system you think works best. If you want a countertop model that is an all-in-one unit you should opt for the Egg Genie. If you are looking for something that preserves the old fashioned way of making hard boiled eggs, but takes out the peeling process, go with Eggies. Compared to doing it all the old way, these two will give you marked improvement, and you’ll wonder how you ever got on without an egg cooker.