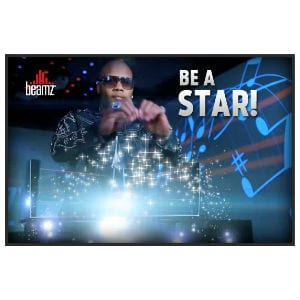 Beamz is a music mixing device that uses laser beams as the instrument so that you can add your own effects and create your own music by just waving your hands in the air. It’s brought to you by Flo Rida, so let’s see if it lives up to the hype.

Overview
Making beats and mixing sounds is its own artform, and there are those that make a very nice living from it. This device is supposed to give you the power to create you own music, and add effects to existing songs. The real draw is the visual appeal, the way it’s just lasers and you’re using your hands to make music, which definitely looks cool the first time you see it, but perhaps not as cool the second or third time you see someone do it.

The Claim
The makers of Beamz say that just by using your hands to break the laser beam you can add different sound effects and use different instruments to either make your own music, or to enhance songs with additional sounds. They say that every time you use this you’ll sound great, right from the first time. They say you can remix songs, and also record your performances, as well as work with others to make things sound just right.

The Hype
Flo Rida has affixed his name to this gadget, and is shown in the promotional video urging people to try it. There’s no denying that Flo is one of the hottest Rap and Hip Hop performers around these days, so his affiliation with it is going to get a lot of people excited to try this.

The Cost
They have this set up so that you can try it out for just $20 up front. That’s the easy part. The tricky part will be remembering that you have 30 days to try it out before they take out the first of two $125 charges. They take out the second payment 60 days later instead of 30, and our only guess is so that it gives your bank account time to recover. That means the total price of Beamz if you go with the trial offer is $270. They do have a one-payment option where if you buy it all upfront they will knock $50 so you pay $220.

The Commitment
They say you’ll sound good with this the first time you use it. In all reality it’s going to take some time to figure out what sounds good and what doesn’t, and also to go through the “hundreds of instruments and sound effects” it reportedly comes with.

Evaluation
Usually when you see a product with its very own commercial trying to put it in the best light they make it look good. But in the case of Beamz we have yet to see anyone make anything close to good sounding music with it, and that includes Flo Rida. It looks as if it’s the first time he’s ever seen it or used it, and doesn’t really add much to the song that was already playing. In fact, none of the sounds made in the commercial for this sounded even halfway decent, which doesn’t bode well for a nearly $300 piece of equipment.

When you’re asking for $270 for a musical instrument you take on the burden of making it seem like it is worth that price tag. Maybe to a working DJ that is paid for their craft this could be an investment, but to the casual appreciator of music this is a pretty steep payment for something that could easily end up going unused and sitting in a closet. We just don’t see this making a strong enough case for itself at this price point, and to be marketed to the general public.

Beamz may work for a professional DJ that is paid to perform and wow a crowd, but for most people sitting at home trying to have fun with this, it looks like it would be a disappointment, and would lead to buyer’s remorse because of the high price tag. It’s likely a nice piece of equipment, and appears to function well in demonstrations, at least on a technical level. But the only people we’ve seen that are able to even remotely make this look good are professional DJs and all they were doing is adding one little beat here and there by waving their hand now and then, and that was just for visual effect.

Our Recommendation
As tempting as it would be to try this out for just $20, if you don’t like it then you’re going to have to go through the return process and make sure that it goes smoothly within the 30 day window so that you don’t get charged the first payment of $125.

What do you think? Does Beamz work or not?

← Previous Does Sleek Secrets Really Work?
⚅ back to blog
Next →Does the Fix It Pro Pen Really Work?