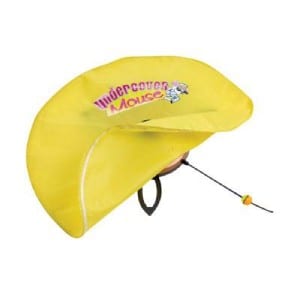 The Cat’s Meow is a cat toy that simulates a small rodent or critter running around under a bag. They say it is designed to prevent boredom in your cat, but will your pet really get into it, or will they just say “meh”?

Overview
Cats can be pretty finicky about what they play with, and how long they play with it. If they don’t have enough stimulation throughout the day they may end up taking it out on your furniture, or trying to play with you and inadvertently scratching you. It’s good to get the excess energy from your cat out with toys and daily exercise with play time.

The Claim
The makers of the Cat’s Meow say that it will keep your cat engaged and keep them from scratching up the furniture or playing rough with each other. They say the rotating wand imitates a mouse that is scurrying underneath things, which immediately gets your cat’s attention and gets them to at least be curious about it. To keep them guessing it says that it’s designed to randomly change up speed and direction so that they don’t get bored with it.

As far as the durability of the toy, they say that the motor that runs it is designed to keep going even if it gets pounced on. The circular flaps are made out of nylon so your cat can claw and paw at it and it won’t shred it up as much as if it were made out of cloth. They point out that it’s battery operated, so you can place it anywhere your cat likes to hang out and you don’t have to worry about being tethered by a cord. They also state that both kittens as well as older cats will want to play with this.

The Hype
They have an infomercial that shows different cats using the device and batting at it. While these ads are meant to show the product in the best possible light, it’s important to realize that you’ll have to be the one to size up your cat and determine just how much fun they’ll have with this.

The Cost
They send you two Cat’s Meow units for $36 which would work for those that have multiple cats, but might be excessive for those with just one cat. It might be handy to have one as a backup in case the first one breaks down, has the batteries go dead, or otherwise goes out of commission. They also mention a mystery gift that’s included with your order, but we were unable to ascertain what that might be, making it a true mystery.

The Commitment
You’ll likely want to watch your cat use this and turn it off when they’re done so you don’t wear out the batteries so quickly. If this can help keep them from scratching and other unwanted behavior it would represent a better relationship with your cat.

Evaluation
The Cat’s Meow does a good job of getting inside your cat’s head and mimicking what they like to chase. For some cats and kittens it doesn’t take much to get and keep their attention, but others are more picky about what they’ll play with or get interested in.

They say the outer flaps are made or ripstop nylon which is the same sort of material that they use on hot air balloons to keep them airborne and hole-free. This is one indication that they are making this thing durable so that you don’t have to worry if your cat gets rough with it and uses their claws on it.

The Cat’s Meow is getting our Potential Try rating, as it will depend largely on what your cat likes to play with. If you know for a fact that your cat likes to jump and pounce on things that appear to be scurrying, like if you move your hand under a blanket, or they have a mouse on a string or some other toy with a similar effect to this, then it would be a go. Most kittens would really enjoy this device, but we’re skeptical that older cats would use it for more than a minute or two.

We’re pretty convinced that mechanically this cat toy will work, but it will depend entirely on how much your cat subscribes to it.

Our Recommendation
The cost of each unit breaks down to $18 each including delivery, which would mean that they have to work just as described with a motor that lasts a while. This is a pretty pricey cat toy, and if you’re willing to invest in it it had better withstand repeated use. After all, if you return it you’re only getting $20 of your $36 back and you’ll have to pay return shipping costs.

What do you think? Does Cat’s Meow work or not?

← Previous Does C9-T11 Really Work?
⚅ back to blog
Next →Does Adonis Golden Ratio Really Work?

8 Customer Reviews on “Does the Cat’s Meow Really Work?”