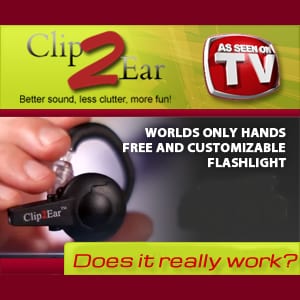 Clip 2 Ear claims to be the world’s first hands-free flashlight, worn on your ear, sort of like a Bluetooth for your cell phone. Pretty easy to see that this frees up both of your hands so you don’t have to worry about holding the flashlight and getting things done at the same time. But does this really work, reserve reason why someone hasn’t invented a light for your ear by now.

Overview
Fumbling with a flashlight can be a real pain, especially when you have to do something in the dark involving your hands. So the examples they give are working on a car, changing a tire, and taking a camping trip are all pretty good. Who doesn’t have the experience of dropping a flashlight, or at least trying to figure out how to hold the flashlight and do what you need to do? A flashlight is a great device, but there is room for improvement.

The Claim
They say that this is bought by police offers, campers, plumbers, mechanics, bartenders, security and paramedics, and it’s easy to see why these types of people would be interested in it. But how about the rest of us that just want something for use around the house, for various projects, and for when the power goes out?

The Hype
The hype is that this is just a flashlight you wear on your ear, and could create just as many problems as it solves. Bluetooth headsets have a knack of falling off the ear, and it’s not very clear how well the Clip 2 Ear stays on the ear. If it doesn’t stay put, it sort of ruins the whole idea.

The Cost
It’s $20 for a set of two Clip 2 Ear units, plus shipping and handling for both. This is one of those products where having two of them actually makes sense. You can keep one near the bed, and keep another one in a strategic location in case the power goes out.

The Commitment
With a product like this you’ll have to remember to use it. It sounds funny, but since the need to use it doesn’t arise every single day, you might forget you have it when the need actually does pop up.

Evaluation
One of the uses they show for Clip 2 Ear is using it as a light to read your book. While this does seem like a good idea, your head naturally moves a lot, and in order to keep the light in one place you have to keep your head very still. Having your head move around, and the light move around with it is very distracting when you’re reading. This is one example that they gave that we don’t quite agree with.

Another example that they gave was fixing a car. This made a lot of sense because you need your hands free to use the tools to get the job done, and it’s easy enough to keep the lights that he and focused on what you’re looking at.

Another example they give his kids wearing it to go trick-or-treating on Halloween. This seems like they were really grasping at straws in the marketing department, because this is a once a year occurrence and it would seem silly to buy a product you only use annually. They also give an example of a police officer using it to pull someone over at night, and a bouncer using it to check people’s IDs. These are two more examples that probably won’t apply to 98% of the people out there.

Most people that you have said that works like they thought it would and that it does come in handy and some instances. A few people asked if it comes with a money back guarantee, and the answer is that yes it does, so there’s really no reason not to try it out and see if it fits your lifestyle.

If you thought the Clip 2 Ear was clever when he sought, you probably enjoy having it in your home and find a lot of uses for it. It’s a pretty novel idea, and would be great for camping trips, car repair, and any other time you find yourself in need of a flashlight and two hands. It gets our Thumbs Up rating because it doesn’t make a lot of outlandish claims, and it does what it says it does, illuminating your life when you need it, without tying up your hands.

Our Recommendation
This is one 2-for-1 offer that we don’t mind recommending. Some companies make you order two products even when it doesn’t really make sense to have two of them. This is one product where it makes sense to keep one in the car, as well as one in the home. Even if you don’t find a use for these on a regular basis, they’re still good to have around for emergency situations.

What do you think? Does Clip 2 Ear work or not?

← Previous Does Cupid.com Really Work?
⚅ back to blog
Next →Does OxyElite Pro Really Work?