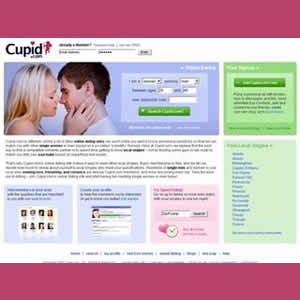 Cupid.com aims to separate itself from its competitors by offering a fast sign-up process and introducing you to people that are locally based. Unlike services like eHarmony and Chemistry there is no long questionnaire that you have to fill out in order to get started. This is a sort of throwback to the early days of online dating when you just filled out a profile and left things up to chance rather than science. But does this old school method really work?

Overview
The dating and singles scene can be pretty rough in real life, and this translates to the online world as well. It seems that everyone wants to find love, or at least the date for this Friday night, so it shouldn’t be too hard in theory to find someone to connect with. However, there seems to be a dating site popping up every other day claiming to have a new angle and a new theory on how two people can meet and find love online.

The Claim
Cupid.com claims that you can find partners for fun, dating, and long-term relationships at their site. This alone is a pretty big claim, because some sites like eHarmony came to fruition because they focused on people that were more serious about dating and looking for a long-term thing. Match.com focuses more on casual dating, and there are other dating sites that focus on more of a no strings attached crowd. To say that you can cater to all three of these dating styles is pretty impressive.

The Hype
The hype is that this is just another dating site, and although Cupid might be a cute mascot and icon for your site, it’s probably not likely that you’re going to find the love of your life here.

The Cost
It’s free to get started, just like it is with all the other dating sites out there. Of course at some point they’re going to ask you for payment, usually in order to talk to your matches, or to access the better features of the site. They have plans that start from $30 per month.

The Commitment
No matter which online dating site you end up going with, you’re going to have to put the time in to make sure that your profile looks as good as it can, and put your best foot forward. Signing up with Cupid.com is easy enough, and you can even sign up faster with Facebook without having your information shared on your wall. However, if you think you’re going to attract the love of your life by taking a passive stance, or think that it’s just going to fall in your lap, you may be disappointed.

Evaluation
The general consensus is that it’s easy enough to sign up and get started, but the chances of you actually finding someone that’s a potential mate is pretty slim. There aren’t a lot of features, and they’ve intentionally done away with a lot of the advances that some of the other sites out there use, claiming that simple is better.

They’ve gone with a more minimalist approach, cutting the fat and only focusing on the essentials like profile descriptions, profile pictures, and other criteria that you can judge people on. Keep in mind though that other people will be judging you based on these very limited criteria. You don’t get the paint as deep of the picture as you can at other sites.

While we like a theory behind Cupid.com, it doesn’t really work like you think it would. Their philosophy that it’s a waste of time filling out a long and detailed profile with interview style questions, and having your questionnaire matched with other people based on an algorithm doesn’t work is a little harsh. There are people that have met on eHarmony that said the service was almost too good at matching them, and they have nothing to argue about. That has to count for something, and at the very least is a huge timesaver from combing through all the people that are really a good match to your values.

Our Recommendation
If you’re already signed up with one of the big boys like eHarmony, Match, Chemistry, or Plenty of Fish, you’re pretty well set up and you don’t really need something like Cupid.com. All of these other sites let you narrow down to your geographic region, which is Cupid.com’s only real feature that they push. Unfortunately, it’s not really that big of a feature, and it’s not enough to use their service over others.

That being said, there is no real harm in signing up because it is super fast and you can even do it with your Facebook profile. When it comes to the dating game, really a numbers game, so increasing your number of interactions should result in more opportunities for a date.

What do you think? Does Cupid.com work or not?