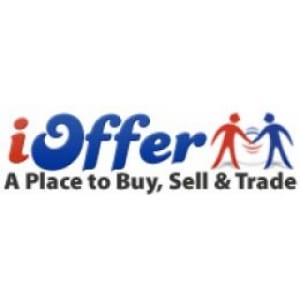 Getting a great deal will get people to do things they don’t normally do, and this seems to be the case with most iOffer customers. It’s hard to see why people make purchases through the site, unless they find a deal that they just can’t pass up. This would involve making an offer to a seller and having them accept it. Seems silly though, because a seller is only going to accept an offer if they are making out good on the deal.

Overview
Some people have said that this website is run and owned by a Chinese company, which is why orders take 2 weeks to arrive in many cases. However, it is important to note that iOffer is an American company, it just allows vendors from all parts of the world to sell their wares. It seems to have fewer restrictions than eBay, which is why it attracts such a broad range of sellers.

The Claim
Their tagline is that this is a place to buy, sell, and trade. Although that’s what eBay is, so is there really a need for both? They say that they came up with the idea of letting people negotiate their own prices with sellers by making offers, instead of bidding through an auction process.

The Hype
The hype comes from some of the deals you can get at iOffer. Some of them seem too good to be true, and most of the time they are. For example, there are many knock-off items being sold through vendors here, so if you see a very expensive brand name item on sale for cheap you can be sure that it is not going to be the real thing once it arrives.

The Cost
As a buyer there aren’t any additional costs to using iOffer. The seller is charged fees to list and sell their goods and that is how iOffer makes their money.

The Commitment
You have to really spend a good amount of time at their site if you want to find a good deal. After that you have to commit to dealing with a seller that probably doesn’t have a lot of experience selling items at retail. Also, you have to put a lot of trust in the fact that you’ll be getting the item as its depicted, and that it will arrive in a suitable timeframe. You also have to worry if you’re buying authentic goods. That’s a lot of commitment.

Evaluation
Let’s do a case study of buying a controller for a video game system. We found a “RED 6 AXIS BLUETOOTH WIRELESS CONTROLLER FOR SONY PS3” priced at $32 with free shipping. It says some hulabaloo about being a wholesale price and only good for one week. The vendor has a 5 star rating after 4500 transactions. However, this seller is obviously being misleading, because if that is the wholesale price then they would be taking a loss if they sold it at anything lower, and the whole point of using iOffer is to make an offer and get a lower price than what is listed.

Amazon has the same controller for half the price. So why bother with the whole process of making an offer to this seller, when you can just go buy with One Click from Amazon and have it delivered straightaway.

Is iOffer a Scam?
The reason you’ll see so many complaints about iOffer is not so much because it’s a bad website, but just that it’s filled with some lousy vendors. In order to differentiate themselves from sites like eBay, and to capture some of the market share, they had to be somewhat lax of who they let in to sell stuff. You can’t have an online site like this without having products for people to buy. By lowering the bar as far as who can sell, and from where, they created a situation where a lot of people have gotten lousy items, lousy service, or both.

So is iOffer themselves a scam? No, not really. But they are the home to plenty of scammers, so it’s something of a gray area.

iOffer is getting our Thumbs Down. They don’t really bring enough to the table to justify going through with a purchase. The idea they started off with was a sound one, but the muddied the whole thing by allowing vendors in that really have no right to sell things to anyone. Their site looks like eBay if it was populated by rank amateur sellers selling various odds and ends.

We don’t like when companies allow a sort of wild west atmosphere and then put up a page with tips on safe buying and selling. It’s as if they allow the danger, and then try to teach you how to avoid it. Why not just get rid of the danger?

Our Recommendation
We’re not going to recommend iOffer. Although you might find a deal or two on the site, it’s just not worth the mental fretting and possible headaches to potentially get somewhat of a good deal.

What do you think? Does iOffer work or not?

← Previous Does Life Cell Six In One Cream Really Combat Those Wrinkles?
⚅ back to blog
Next →Does Cupid.com Really Work?