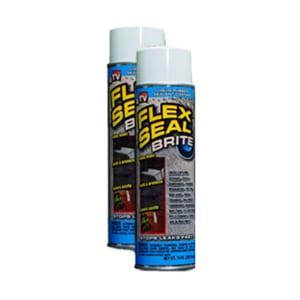 Flex Seal Brite was made for you if you were just about to buy the original Flex Seal but didn’t want to deal with the black color it leaves behind. This is designed to be able to cover up leaky gutters, seal window trim, and provide a watertight coating wherever you need it. It uses the same formula as the original, so it should be able to ride on the success of its predecessor. But does this really work as well?

Overview
If you’ve got a leak in the house you’ve probably wished that you could fix it easily, without having to replace the item, or call a repairman to fix the leak. What this product basically boils down to is sprayable rubber cement, and it’s been around for a while in various forms and brands. This is the first time that they’ve showcased it as a cure-all for lots of different uses around the home. They’ve given it that “infomercial appeal” by hyping it up and making you think that you’ll find lots of uses for it around your home.

The Claim
Flex Seal Brite claims that you’ll be able to use this to fix all sorts of problems around the house, from cracked flower pots and fountains, to gutters that won’t hold the water going through them. They say that it blends with lighter colors, and that it is easily painted over, so if you are repairing white or brightly colored items it shouldn’t stand out like a sore thumb. And if you want to, you can just paint it to match whatever you are fixing.

The Hype
This product is following on the heels of the original Flex Seal soit is getting the spillover hype from the first infomercial and sales of the first version. They say that they listened to the requests from people that had purchased the previous product, or didn’t purchase it because they wanted a light or white color instead. That should mean there was a built-in consumer base ready to buy this, which is always nice when you are the manufacturer, knowing that you’re going to have an instant hit on your hands.

The Cost
Flex Seal Brite is $39.89 altogether, and that gets you two cans of the stuff. The FTC must be cracking down on companies lately because they are getting better at putting the total cost out in the open instead of simply showing a $19.95 price tag and then charging a price that’s nearly double that. They calculate this by charging $20 for the first can plus $10 shipping and handling, plus $10 additional shipping and handling on the second obligatory can.

The Commitment
When compared to finding other ways to fix the same problems, paying someone else to fix them, or paying the price to replace the items in question, this should be a reduction in your commitment level. It is boasting that it is very easy to use, and it is a spray can which makes it a point-and-shoot kind of item. If you aren’t much of a handyperson you should still be able to use this with no problems, just as long as what you’re trying to do fits within the parameters of what this is capable of fixing.

It’s important to remember that this isn’t rocket science here, and they haven’t stumbled upon some newly invented substance. They are just marketing a rubber sealant in a very effective way. You can compare this to other rubber sealants on the market, and you don’t have to get into the mindset that this is your only options when it comes to a sprayable sealant. We’re talking about chemicals here, and they’re not all created equally. Be sure to check out your other options and see which one is the best choice for your specific job.

Flex Seal Brite is getting our Try recommendation, if you’ve got a specific project in mind. You don’t want to get this in the hope that if you buy it the problem will come, but if you found yourself nodding along with the infomercial, chances are you’ve already got a situation in mind for it. If it works for that problem then it’s money well spent, and if it’s not very effective on that project, you will now have it on hand in the event that another problem arises, and you might have better luck with it.

Our Recommendation
If you’ve wanted a rubber sealant but wanted one that sprayed on white instead of black, then this is probably something you’ll enjoy. Like with most products you see advertised on TV or online with a promotional video, you have to keep your expectations at a reasonable level. If you think this is going to be some sort of savior or be able to save you from costly plumbing problems, you’ll probably disappointed, but if you’ve got a cracked flower pot and it happens to be white, you’ll probably be impressed.

What do you think? Does Flex Seal Brite work or not?