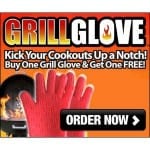 If you’ve ever dropped a piece of mouth-watering barbecue, you probably too notice when you saw the Grill Glove ad. Rather than be an oven mitt for the BBQ grill, it goes a step further and lets you stick your hand right into the mix. This supposedly lets you place food, move it around, and flip it when it needs it. But does it work the way the guy makes it seem on TV?

Overview
Grilling is a fun and healthy way to cook, but can be a bit tricky when you’re trying to handle foods, and flames are lapping up at your hand, even when you’re using tongs. Some foods are also rather cumbersome, and trying to tong them doesn’t really work. Others, like a thick steak, are too heavy to really be tong-able.

The Claim
The Grill Glove claim is that you can simply use your hand, one of the most versatile utensils on the planet, for all your grilling needs. Once you see it in action it’s easy to see all of the possible benefits.

They say that it’s heatproof up to 500 degrees, which is believable, and makes sense seeing how they’re recommending you to stick your hand into fire.

You can turn all your foods, regardless of the size, shape and heaviness of them. You’ll have the exact precision you need because you’re using your thumb and fingers to turn food, or to move it from the grill to a plate.

They also point out that the glove is waterproof, so you can dunk your hand in boiling water to retrieve hard boiled eggs, or a cooked lobster, and you won’t burn your hand at all.

Another claim is that unlike tongs and other utensils for the grill, the Grill Glove is easy to clean since it’s dishwasher safe, making it more sanitary. Since you get two Grill Gloves you could designate one for chicken and one for beef, or one for putting raw meats on, and the other for taking cooked meats off and turning them.

The Hype
The hype comes from all of the uses that you might be able to use the glove for, and how heat resistant it is. In the infomercial, he takes a blowtorch to his hand just to show how well it works. In most instances you wouldn’t want to try that at home, and it’s a little over the top to prove a point that was already proven.

The other hype comes from the fact that even though they say it’s easy, the glove looks rather bulky and floppy, and may be just as cumbersome to use as tongs. With it’s floppyness it could bump foods out of the way and potentially off the grill, or so it seems. Plus the amount of precision and control you have with an over-sized glove like this is questionable.

The Cost
The Grill Glove is moderately priced, and you can pick it up from the official website for $15 plus shipping for $7, but they won’t let you order just one, so you have to buy a second one for $7. That means you get 2 Grill Gloves for $29.

The Commitment
If you’re already a Master Griller then you won’t need to search around for a reason to use Grill Glove. Put it right next to your grill and you’ll be able to try it out the next time you decide to use it.

Evaluation
Common complaints are that it’s not as heat resistant is it is shown, that it is hard to get off and get on, that it’s made to fit either hand but doesn’t fit well on either one, and that it needs to be made in a bigger size.

It seems to be a coin flip when it comes to feedback from actual users. In the land of TV products this usually means that it doesn’t live up to the expectations that the advertisement sets.

Our Recommendation
If you’re a certified grill nut, go ahead and pick up a Grill Glove. If you just like the idea of having a heat-proof hand, pass on this one because it might not protect your hand as much as it is shown to.

What do you think? Does Grill Glove really work?

← Previous Do Money Back Guarantees Really Work?
⚅ back to blog
Next →Do Always Fresh Containers Really Work?