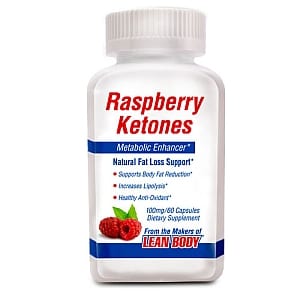 If you’ve been exploring which raspberry ketone product to try, you’ve probably run into Labrada Nutrition Raspberry Ketones and are wondering if this is the one to go with. When you get down to it, it shouldn’t be too hard to find a product that has what you want, because you’re just trying to get one extract in one specific dosage. Labrada Nutrition has been around for quite awhile, and raspberry ketones are just one of the things they make, so how good is their reputation, and should you try this?

Overview
Dr. Oz opened up a big can of worms on his show when he featured a short, 5 minute segment on the benefits of raspberry ketones. Why did it make such a splash? Well, this is an all-natural weight loss product, with no known side effects, and he basically stated that it works on a hormonal level to switch your body over to working like a thin person’s body naturally does. For many of us that wish we were born with better genes, this seems to be the ticket to get the same effect.

The Claim
Labrada Nutrition Raspberry Ketones come in the recommended dosage of 100mg as was mentioned on the Dr. Oz show. They also say that their bottle was one of the many bottles that were shown as a group of products on the show, although he didn’t make a mention of a specific brand name that he recommends. They say that this product stimulates fat loss, while at the same time inhibits the absorption of fat, so the net result is that it increases your body’s natural fat burning systems. This is the claim of raspberry ketones in general though, and that’s why people are so keen to try them.

The Hype
There is a lot of hype around these raspberry extracts, and it all started with the Dr. Oz show. The reason it spread like wildfire is because of how convicted he was while recommending it. You couldn’t ask for a more glowing endorsement. He does promote a lot of different health remedies and products, but it was rare to see him so elated about it. He admitted that he had just found out about them, but also stated that he had done his research and liked what he saw.

The Cost
The price is $19 for a bottle of 60, which will last you two months if you just take one pill a day, or just one month if you double the dosage. The bottle is saying that you should take 2 pills per day, making this a month-long supply, but Dr. Oz said you need 100mg so you could just take 1 pill and make it last twice as long, bringing the monthly cost down to less than $10.

The Commitment
Raspberry ketones are supposed to be very low commitment, which is why people are so excited about them. All you have to do is take a pill, and all else being equal you should start to see signs of weight loss with continued use. There’s no bulking phase like there are with other products, and you don’t have to worry about your body getting used to it, or building a resistance to it like it can with other supplements. All you do is start taking it, and then keep taking it. The expert on the Dr. Oz show said that the longer you take it the better the results you see, and at this price point they make it pretty easy.

Evaluation
Labrada Nutrition Raspberry Ketones are made by a company that has been producing supplements for some time now, so it’s comforting knowing that you’re getting a product from a company that has their reputation on the line, and not just some company that has sprouted up to cash in on the raspberry ketones craze for as long as it lasts and will then shut down shop. If you’re going to go with this long term like they recommended on the show, you’ll want to make sure you can get it month after month from the same source.

There’s no reason not to give Labrada Nutrition Raspberry Ketones a try, as they contain all of what you need in one inexpensive pill. Their bottle was featured on the show, and there aren’t any other added fillers that makes it different than what they said to take on the show. There are companies out there that are mixing ketones with a ton of other herbs, plants, and fruit extracts, saying that it enhances the ketones, but their claims are baseless and could be dangerous. You want straight up raspberry ketones and that’s what this has.

Our Recommendation
We’re recommending trying this one, but we also recommend Raspberry Ketones Max, as it also met all of the requirements stated on the Dr. Oz show, and is at a price that is pretty attractive. When it comes to finding the right raspberry ketones product, it’s all a matter of finding something that works for you, and then sticking with it day after day. After one month you should definitely be able to tell if it’s having an effect, so try out a product for one month, and if it doesn’t work for you switch it up and try a different brand.

What do you think? Does Labrada Nutrition Raspberry Ketones work or not?