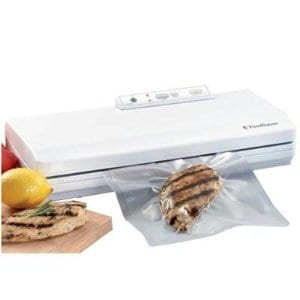 If you’re tired of your food going bad, or trying to buy foods in bulk and then freeze them up, you have probably considered the line of Foodsaver vacuum sealers. They are the ones that suck up all of the air in the food bag and then create an airtight seal so that your food stays fresher longer. But do these actually work, because the concept seems sound, but it’s things like this that have a knack for not working out in reality.

Overview
The idea of vacuum sealing food is not a new one, but getting it right and bringing the capability home to consumers seems to be something that only a few companies can do. There have been vacuum sealing systems that have flopped over the years, including handheld units that were supposed to be able to use any bag, including potato chip bags. The Foodsaver models all use their special bags, so you have to be aware that when you buy a unit, you’re also getting on board with getting their bags when you run out, as you can’t use ordinary Ziplock bags.

The Claim
Foodsaver Vacuum Sealers say that you can keep food fresher five times longer than conventional storage systems, which means that you can save money on your food bill by throwing away fewer leftovers, and storing foods longer while still having them taste fresh. They also say that you can save $2700 a year by using it, and they calculate this by saying you can buy in bulk, buy foods on sale, and not waste so much food. When you divide that by 12 it’s not so unlikely that you could save a couple hundred dollars a month this way, especially by buying meat in bulk when it’s on sale, as this is typically the most expensive part of a meal.

The Hype
The hype is that every family would want to have one of these in the home, as it brings a factory seal to foods that you’ve already opened. However, it’s not really priced at a level where everyone can afford it, which only builds up the desire to get one, so you can have that “home that has everything”.

The Cost
Foodsaver Vacuum Sealers come in a wide range of prices, from about $150 to over $300 for their most advanced model. But that’s just the front end cost. The ongoing cost isn’t so bad, as you can pick up packs of their special vacuum sealer bags for $10-$20. If you remember their claim that you can store foods up to 5 times longer, these should last you five times longer than conventional plastic bags, so they would have to cost five times as much to make it equal, which they don’t. So over time the unit should pay for itself, especially if you take their tip of buying in bulk and on sale and then storing things in the freezer until they’re ready for use.

The Commitment
There is a bit of commitment to using these systems, as you first have to take the time to learn how to use it properly, and then you have to remember to use it in the moment when you have some food that needs storing. Most people don’t have a problem remembering to use it, and it quickly becomes part of their daily routine, as the need to store food pops up on a regular basis.

Evaluation
The majority of people say that most models work just fine. The overall consensus is that this is somewhat pricey, but that it provides a good seal. One common benefit that was confirmed by multiple users is that it works well at preventing freezer burn. If you like to store your pre-cooked meat in the freezer until you’re ready to cook it up, you’ll definitely appreciate this feature.

User error can easily account for many of the people that are complaining about it. As we stated earlier, it does take a bit of time to learn how to use it properly, but there are instructional videos and a users manual to try to help you get it right. Most people that become adept at using it have no complaints about its functionality.

There’s no doubt that Foodsaver Vacuum Sealers work. It takes a bit of finesse to get it right, but when you go pro with it you’ll have no trouble creating a near factory seal to all sorts of foods. It’s in their best interest to deliver a product that works, because they want you to keep buying the food storage bags. Their business model would be pretty shaky if they just relied on a one-time purchase and needed a continual stream of new users in order to continue making money. The majority of people that have bought it are happy with their purchase, and would buy it again if they had the choice to make all over again.

Our Recommendation
If it’s worth it to you to have something to keep your food fresh and ready to go, you might want to put some money towards it and also take the time to get familiar with how to use it. If this is just a passing interest of yours and you are hoping that you’ll buy more of your own groceries and cook more meals at home if you have a way to store the leftovers, you might want to pass on it.

What do you think? Do Foodsaver Vacuum Sealers work or not?

← Previous Does Labrada Nutrition Raspberry Ketones Really Help You Lose Fat?
⚅ back to blog
Next →Do Whiskey Stones Really Chill Your Whiskey?