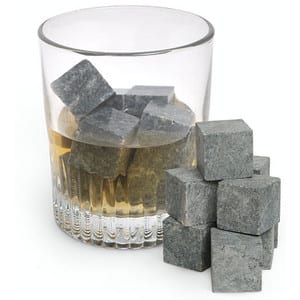 Whiskey Stones are aimed at the discerning whiskey drinker that wants to keep their beverage cold, without watering it down with ice. This is definitely a niche market, so you have to consider the fact that you might not be a part of it, even if you like drinking whiskey. For many people the taste of straight whiskey is too harsh, and that’s why some popular drinks are a whiskey and Coke, or a mixed drink like a Whiskey Sour or a Bourbon Flip.

Some of the cheaper brands of whiskey really need to be mixed with other beverages because they taste horrible straight up. But if you’ve splurged on something like Ballantine’s 30 Year you don’t want anything getting in the way of the taste, but you don’t want to drink it at room temperature either. Having something like Whiskey Stones would be good to have around if you like to entertain, as it can be a conversation starter, and if you have a whiskey lover in the house they’ll be glad they came to your get together.

Overview
It’s hard not to remember the scene in Who Framed Roger Rabbit when Eddie Valiant orders a scotch on the rocks and the toon brings him a drink with actual rocks on it. That’s basically the concept here, only the rocks are frozen, not real rocks, and are supposed to bring the same effect as ice cubes, without watering down the drink or diluting the taste of the whiskey. This can be especially important if you’re drinking a premium brand, and you want to savor the flavor.

The Claim
Teroforma, the maker of Whiskey Stones, claims that these keep your drink cold without watering it down. It’s basically for those that like to drink their whiskey strong, without cutting it up with water, and without the ice messing with the flavor in any way. Some places are trying to recommend that you can use Whiskey Stones for non-alcoholic beverages, but this is not really the case, as they do not get as cold as ice, and they are not a good substitute for ice cubes in other drinks.

The Cost
A set of Whiskey Stones is just $20 and that gets you 9 stones and their special freezer bag. No matter how you cut it this is a great price, and if it can enhance your experience it’s definitely worth it.

The Commitment
All you need to do in order to use these is freeze them in their special bag for about 4 hours. The bag will make sure that the stones don’t pick up that freezer burn taste. It’s important to note that these aren’t really made out of rocks, so you don’t to worry about consuming any rock particles or having them break apart on you. You place three stones in the glass, and then only pour enough whiskey in to cover the bottom two stones. This means you can enjoy a glass with up to two other friends.

Evaluation
This is a pretty solid concept, and after you get used to the idea of sipping your whiskey with rock-like cubes in it instead of ice cubes, it does deliver a better experience than a traditional whiskey on the rocks. However, you have to be a particular type of whiskey drinker in order to use them the way they are intended. Ice cubes are colder than Whiskey Stones, so if you like a glass of very cold whiskey then you won’t like how the rocks perform. These won’t get your beverage icy cold, but they aren’t designed to either. It’s supposed to give your drink a slight chill to it, so that it doesn’t interfere with the flavor, but also takes some of the bite out of it.

Another thing to be concerned about is getting the real McCoy. There are generic knock-offs that don’t do as good of a job, so make sure you order directly from their official site, or go through an authorized retailer. Again the price should be around $20, which isn’t bad, so if you think you’re getting an unbeatable deal you’re probably getting something that won’t perform as well.

Whiskey Stones are a great gift for the more eclectic whiskey drinker that makes it an event, or an after-work ritual. If you’re just a casual drinker and don’t even fancy yourself a wannabe aficiando, then it’s probably not something you’ll need or enjoy. However, if you are someone that takes the experience seriously, and wants to try whiskey as close to the way the distillers want you to, this is a pretty good invention.

Our Recommendation
Pick one of these up if you’re a whiskey fan. At this price, why not? If you like the results it gets you, then it’s a fantastic purchase, and if you find that you prefer ice to these, then you’re out an Andrew Jackson and life goes on.

What do you think? Does Whiskey Stones work or not?

← Previous Do Foodsaver Vacuum Sealers Really Keep Food Fresh?
⚅ back to blog
Next →How Well Does InstaHang Really Work?

Customer Review on “Do Whiskey Stones Really Chill Your Whiskey?”