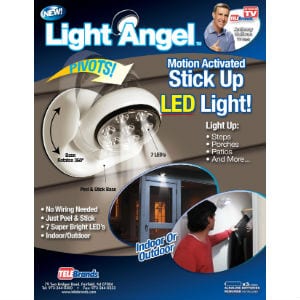 The Light Angel is a motion sensor light that you can place wherever you need it to provide an automatic light without having to figure out the wiring and installation. But how well does it really light up these dark places, and does it actually work?

Overview
Motion lights come in handy in all sorts of situations, whether you need them indoors for seeing at night without having to find the light switch, or outdoors when you want to light things up so you can see who’s outside.

The Claim
The makers of the Light Angel say that you can put it wherever you want because it is battery powered, and that it swivels so you can point the light wherever you need it once it’s in place. They say it’s motion activated and only stays on for 30 seconds at a time so it doesn’t need a switch and it won’t use up an excessive amount of battery life each time it turns on.

The Hype
This has an infomercial, but it doesn’t really hype up the situation, it basically just shows examples of how you’d use this and where you’d put it. Most likely everyone has at least one idea of where they’d put this if they had it. They may exaggerate the problem a little by showing a guy trip up a flight of stairs because they’re not lit up, but the underlying problem is still legit.

The Cost
The Light Angel is $21 and they offer a second unit as well as an Olde Brooklyn Lantern for an additional $10 charge. The lantern is usually sold on a 2 for 1 offer for $30 which gives it a price of $15 so it’s a way to score yourself one of those for less while also getting a second motion light. It doesn’t sound like a bad upcharge and would put you at $31 for a total of 3 lamps instead of $21 for just one.

The Commitment
All you really need to do is stick this in a spot where you need light and a motion sensor light makes the most sense. If it’s outside you definitely wouldn’t want to have to switch it on and switch it off you’d just want it to turn on whenever someone is near it. Your lack of involvement in the installation process is perhaps the biggest selling feature here, since you could put this in places that just aren’t feasible to have a motion activated light. It could cost hundreds of dollars to have an electrician put a motion light in tricky places around the house.

Evaluation
The Light Angel is a great idea because it is using a concept that has already been around for quite some time, a motion sensor light, and it is making it easy to use so that you don’t have to be an electrician to install it. You just put it where you want it and it’s ready to go. This will appeal to those with no handyman skills, or those that want to save on the cost of hiring someone to wire up a motion light in a place that currently doesn’t have a light. If you simply want one of your existing lights to be motion activated it might be easy to add a motion sensor to it, so you’ll have to evaluate your circumstance to see what’s best.

It is unlikely that the batteries in the unit will last for the 100,000 hours that they say the bulbs will, so you’ll probably be replacing the batteries far more often than the bulbs. The unit is not using any rocket science, it just mounts with adhesive tape and uses battery powered lights and a motion sensor. The novelty of this invention is that they are putting it all together in one unit and making a stick-anywhere motion light which is something that didn’t exist before.

The Light Angel is getting our Solid Try rating. The idea is solid enough, and while it may not be the most technologically sophisticated product on the market, it doesn’t have to be. When the problem is that you need a motion light but don’t want to be bothered with installing a traditional light with a motion sensor on it, all that’s really needed is a battery powered light that lights up when triggered by motion. Simple problem, simple solution, for $20 to $30 and you’re all set, delivered to your door.

Our Recommendation
This is good for places that would not be easy to wire up for an actual motion sensor light. Indoors the best place would probably be a closet so that you can get light in there just when you need it. Outdoors it makes sense for security purposes to light things up when someone comes to your house at night uninvited. But it’s also nice for invited guests too, and for yourself so you can see your keys and unlock the door more easily. That way you don’t have to leave the light on for yourself or anyone else for that matter.

What do you think? Does the Light Angel work or not?

← Previous Does Great Kitchen Secrets Really Work?
⚅ back to blog
Next →Does the Spin Mop Really Work?

8 Customer Reviews on “Does the Light Angel Really Work?”