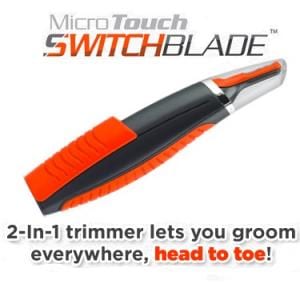 The MicroTouch Switchblade is the latest clipper in a long line offer by Microtouch, and is supposed to be a 2 in 1 trimmer that you can use to keep yourself well-groomed all over. But how well does it work when put to actual use?

Overview
One thing that they did get right is that women’s taste in body hair has shifted over the years, and now having a hairy chest, hairy back, or big mutton chops is not really preferred by the large majority of women. Sure, it’s possible to find a woman that like their man “hairy as a beast” and if you’ve found that woman you should marry her and keep her forever. But if you’re trying to keep yourself shaved and trimmed then you need the right tool in your arsenal.

The Claim
The MicroTouch Switchblade is claimed to be tough enough to handle thick, course hair, but fine enough so that you can trim the most sensitive areas. It’s supposed to have attachments so that you can put on a guard and go over things like your eyebrows so that you don’t have to worry about cutting them too close, and don’t have to worry about being really precise, you can just go over them and these will only cut the hairs that are too long.

The Hype
The hype comes from the fact that MicroTouch has been releasing trimmers for several years now, and they are always trying to make them better than the previous model by adding features to them to try and improve performance.

The Cost
The MicroTouch Switchblade is $35 when you factor in shipping on both the base unit and the added bonus kit. This is a bit pricey when you consider that comparable trimmers go for $20 or so at online retailers like Amazon. Also consider that if you get it, and don’t like it, and end up returning it, not only will you have to pay to send it back, but you’ll only get $20 of your original purchase price, not the full $35.

The Commitment
This is supposed to save you from having to use trimmers that just don’t work as well, or having to pluck your eyebrows or nose hair. It’s also presented as a way to get tough spots like your ears and between your eyes, all of which can be a hassle to keep up with.

Evaluation
The MicroTouch Switchblade is not the first offering from MicroTouch when it comes to battery powered trimmers like these. It’s a marvel that they’ve managed to keep making these trimmers because we have yet to see one get good reviews from those that try them. It seems like over the years they would figure out how to make a better trimmer, but what they seem to do instead is use the same base model, with added bells and whistles in an attempt to justify a purchase.

We’ve actually tried out an earlier model of MicroTouch trimmer, which fell far short of expectations, pulled hair instead of trimmed it, blew through batteries quite easily, and overall was poorly constructed, feeling cheap low quality in your hand. Since then we’ve moved onto other trimmers from trusted brand names that are better built and get all of the hair without needing batteries. In fact, if they would just release a corded version they’d probably sidestep a lot of the lousy reviews these get.

Take for example the MicroTouch Max, which got really bad reviews from users, and looks remarkably similar to the Switchblade. They do such a great job showing the product in its promo video that it’s hard not to want to try it out after seeing it in action. After all, who wouldn’t want to be nice and cleanly shaven and trimmed with little hassle?

MicroTouch Switchblade is getting our Risky Try rating, based on the poor performance of previous trimmer releases from MicroTouch, and the fact that they haven’t done much to address the common complaints people have with their line of trimmers. All they’ve done is given it the ability to switch between blade sizes, but when neither blade works the way it’s supposed to, there’s no advantage in having two of them. The price is also higher than comparable trimmers, and since you’re paying a whopping $15 in shipping costs you’ll only get back a portion of your purchase price if you return it.

Our Recommendation
There are other trimmers like this that do a better job, and have been peer proven to work. We were able to find this D-Finer Precision Trimmer from Norelco which is less than $20 and has a free shipping option. It gets the sort of reviews that a trimmer like this should get, and it comes from a brand that has been making products like these for quite some time.

What do you think? Does Microtouch Switchblade work or not?

← Previous Does the Comfy Core Pillow Really Work?
⚅ back to blog
Next →Does Bark Away Really Work?