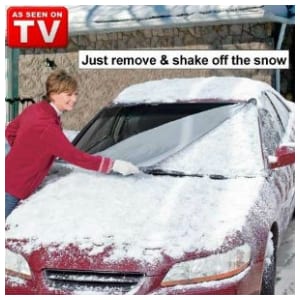 When the weather outside is frightful, Pro Tek Weather Shield hopes to make it a little easier to get into your car and start driving. The TV promo might have gotten you hooked, with blanketed cars being unearthed and looking clean and ready to go. But does it really work that way in real life?

Overview
One of the worst things about winter is wielding the ice scraper and trying to clear a field of vision so you can get to work or run your errands. Nevermind the cold, the runny noses, the numb fingers and ears, the driving in snow and ice, if you could just have a clear windshield it would be one less problem to worry about.

The Claim
The Pro Tek Weather Shield takes proactive measures to keeping your windshield free of ice and snow. When you know a winder storm is on its way, you simply drape it across your car’s windshield. Nature can deliver her fury and when it’s time to use the car you’re supposed to be able to slide the shield off, along with the ice and snow revealing a nearly immaculate windshield. You hop in the car and are on your merry, yet cautious, way.

The Hype
The hype is that this product is geared directly at those suffering through the harsh winters of the northern United States, and that doesn’t have the luxury of parking their cars in a garage. When you see it in action on the infomercial it looks like it would be a winter blessing. But with many products you see marketed on TV, there’s a gap between how it’s depicted and how it actually works when you get it home.

The Cost
The Pro Tek Weather Shield can be found online for less than $10. The original asking price was $20, plus shipping and handling so this is one of those products that has definitely failed in the market place and is in the process of liquidizing its inventory. The good news is that you can get it for a fraction of the original price, but the bad news is it probably isn’t going to live up to its smaller price point.

The Commitment
The major draw to this cover is that it should save you precious time and keep you out of the elements. It’s typically freezing cold, and could potentially still be snowing or the freezing rain may still be falling while you’re trying to clear your windshield. This makes every minute you can spend in the warming car better than those spent outside.

Evaluation
The Pro Tek Weather Shield is almost universally panned by users, with one common complaint being that it’s too small. The runner up in the complaints department is that it’s too thin to do the job. Some more nit picking reveals that the magnets that are supposed to hold it in place like to stick to themselves more, and even when you do get them in place they don’t stay there for long. One question posed is where is it supposed to go when it does manage to do its job? You’re left with a icy cold soaking sheet, and users have said there’s no way it’s going to fit in its supplied storage bag.

Wintry Car Window Tips
Driving with an obstructed windshield is the cause of several accidents each year, and it’s doubly important to see where you’re going when you’re driving on icy, slippery roads. That’s why you won’t want to cut any corners when it comes to clearing your windows in winter. Here’s a tip for getting them clear without a lot of elbow grease. Douse your windshield with straight white vinegar before you go to bed. It will prevent the buildup that occurs overnight and you’ll wake to find a much easier task in front of you.

Other tips include crafting your own windshield cover out of old scraps of carpet, a tarp, old floor mats. The reasoning is sound, if you create a buffer between your windshield and the snow, ice, and other precipitation that’s falling, it’s just a matter of removing the covers and revealing your clear windshield. It might not look as good as having a cover dedicated and made for the purpose of going on your windshield, but as far as delivering results it seems to be somewhat effective, and is better than leaving your car completely unprotected during an overnight storm.

Pro Tek Weather Shield is a flop and gets our Thumbs Down review. A product like this is often given the green light in boardrooms because it can be manufactured for a song by outsourcing to China, and then plugged into the As Seen on TV machine and sold for $25-$28 with shipping. The problem that occurs is that construction is shoddy, or the idea is half-baked and rushed to production and the resulting product is a far cry from the original problem-solver it was conceived as.

Our Recommendation
It seems like they had the right idea, but they didn’t execute it well. We found a similar windshield cover that seems to fit more models of cars, and uses suction cups instead of magnets in order to stay in place. It’s called the Winter Warrior Windshield Cover and can be purchased for around $25 on Amazon.

What do you think? Does Pro Tek Weather Shield work or not?

← Previous Does Derm Exclusive Really Work?
⚅ back to blog
Next →Does Primal Burn Really Work? 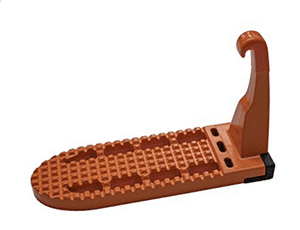 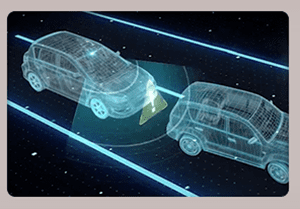 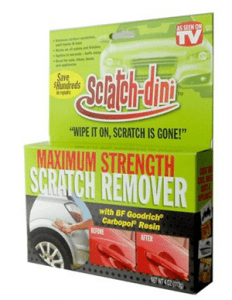