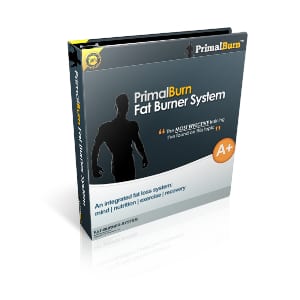 Primal Burn aka Paleo Burn, is a diet and fitness program that is based on the trending Paleo diet. If you stumbled upon it you’ve probably noticed a lot of people trying to get you to buy it, and you’re wondering if it’s something that will work for you or not, or something that you need to buy in order to succeed with a Paleo lifestyle.

Overview
If you’re just now getting into the Paleo diet, or just hearing about it, it’s been referred to as the caveman diet, the Stone Age diet, as well as the hunter-gatherer diet. This is because it dips back into our ancestry and tries to determine what people were eating back then in order to stay fit and healthy. The theory is that there were no fat or obese people back then, so they must have been eating the right foods. It also is a way of cutting out all of the pre-packaged, preservative-packed foods that are not prevalent in our modern society, and gets things back to basics.

The Claim
Ken Burge, the man behind Primal Burn says that you’ll be able to eat the right foods, avoid the wrong foods, and sculpt the body you want. He focuses a lot on hormones, saying that these are the reason why many so-called health foods actually work against the body. He also says that the foods you eat on this program will leave you feeling satisfied instead of hungry. He also says that if you follow his plan your body will naturally start producing more human growth hormone, further adding to your weight loss and muscle building goals.

The Hype
The hype surrounding this diet plan is from all of the affiliates that are hoping to cash in on it by giving it a positive review and then sending you to their affiliate link. Very few of these affiliates will have tried the diet themselves. There is also the attention that the paleo diet is receiving in the news and in health and fitness circles. It all contributes to the buzz surrounding this plan. Ken Burge makes it sound like he invented the Paleo diet, but he didn’t.

The Cost
The Paleo Burn guide goes for $47 and you get it instantly and can start reading it and following it right away. This might seem like a high price for a diet plan that is already out There is a 60 day money back guarantee, so you don’t have to worry about not liking it when you get it. If you don’t like it you simply request a refund and get all of your money back.

The Commitment
Following a system like this will mean making a lot of changes to what you’re used to, and a lot of people won’t be able to make an overhaul like that. If you’re used to eating a lot of food that isn’t allowed on the plan, or you’re not used to getting a lot of activity in your day, you’ll have to deal with not being able to eat those foods anymore, and start new habits like getting more active.

Evaluation
The Primal Burn program cuts out a ton of stuff that’s just not good for you, so you’ll see results if you can stay on it. You won’t be drinking sodas anymore, going to fast food restaurants, or eating wheat products. This alone will cause many people to lose weight, but he also advocates getting more sleep at the right times, which will help you with your weight loss as well. The combination of all of the tips he recommends will yield results for the majority of users out there.

Consider a few criticisms of the paleo diet. The first is that there’s no way to really know what our ancestors were eating, because there aren’t any records and science can only use archaeological evidence. Prehistoric also had shorter life spans so there’s no way to tell how well their diet would have supported them to an older age. They were also burning off thousands more calories due to their nomadic lifestyle, hunting down food and gathering what was nearby involves running, walking, jumping, crouching, and more. They would have been able to eat just about anything and burn it off due to their lifestyle.

The Primal Burn system will most definitely get you results if you follow it. Many people have had success following a Paleo way of eating, and this program will break it down for you so there’s no guesswork and you don’t have to go from site to site trying to figure out what you should and shouldn’t eat. For that reason we’re giving it the Thumbs Up, as it can save you time and give you the confidence needed when embarking down a new path. We also like that it’s backed by an iron clad guarantee so that those that don’t feel like it’s worth it can get their money back right away.

What do you think? Does Primal Burn work or not?

← Previous Does the Pro Tek Weather Shield Really Work?
⚅ back to blog
Next →Does Olay Regenerist Really Work?