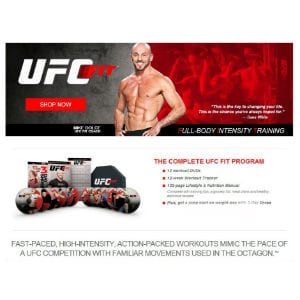 UFC Fit is a full-body intensive training program that is supposed to help you get a UFC style body by following a similar training program to a UFC fighter. With so many different fitness programs around these days, most people just want to know if this is the one they should go with or not.

Overview
UFC is super popular and only seems to be getting bigger. At the same time there is a trend with all of these body transformation programs where you’re working out intensely in hopes of getting the payout of a chiseled body. All you have to do is turn to a UFC match and see two guys in awesome shape. It’s natural to want to want that type of body, but at the same time you have to realize that they train full time to be a fighter.

The Claim
The makers of UFC Fit say that it’s a complete program that will walk you through 12 weeks that are supposed to get you into the best shape of your life. They have Mike Dolce as the coach and face of this program, and he’s built up his brand name over the years, winning MMA matches and coaching people to be their best. He does provide some solid motivational information at his own personal website. You should check out some of his videos on YouTube to see whether you will jive with his coaching style.

The Hype
A product like this combines two popular things, so it doesn’t need much hype. First it’s taking the immensely popular sport of MMA and the number one company behind MMA related competitions, the UFC, and putting it into a weight loss and fitness program, which are always popular. People want to replicate the bodies they see on TV, and this is positioning itself as a way to do that in just 3 months if you follow their system.

The Commitment
This is where it gets tricky. No matter how powerful the tool in your toolkit, if you don’t use it, it can’t do its job. This is where those that have success and those that don’t will be separated. One thing that can be said about UFC fighters is that they are not lacking in the commitment department. They show up every day because they don’t want to get beat up on in their next fight due to improper training. So maybe you’re not a UFC fighter, but you want a body like one. You’re going to have to commit to a program like this that will get you close, as long as you show up and stay motivated.

Evaluation
The UFC Fit system appears to be well made, and well thought out, and to follow several of the moves that a fighter might practice in the gym. They have it all mapped out, so they’ve taken a lot of the thought process out of the equation. So all you should have to do is plug yourself into the system, press play, and start reaping the benefits. They include a lifestyle and nutrition manual, which is essential to getting the full results with this. It can also have trickle over benefits to other areas in your life, because as you get more fit and start feeling better everything around you starts to change. You get more confidence, you feel better about yourself, and you teach yourself the benefits of staying with a task and seeing it through.

After cutting through all of the hype and seeing what this program really offers it’s clear to see that a motivated individual that schedules this into their daily routine would have no problem getting fit, or getting even more in shape if they’re already fit.

UFC Fit is getting our Thumbs Up rating, as it has been shown to work as long as you put it through its paces by turning up each day it tells you to. Block off 12 weeks where you can dedicate the time to do this properly and you should see results. Maybe you won’t get to UFC caliber fitness levels with this, but few of us have the time to train all day long, and we don’t have our meals cooked for us by nutritionists and all the other perks that come from being an elite athlete. And that’s OK because in this instance getting close is close enough to get a majority of the benefits.

Our Recommendation
This would be a top contender if you’re trying to lose weight, or if you’re just trying to get stronger or more cut. The way they have this laid out is great because you simply follow the calendar, line up which exercises you’re supposed to do on any given day, follow the recommendations they give you for eating and how to structure the rest of your day, and simply track your results as you go along.

What do you think? Does UFC Fit work or not?

← Previous Does Liberty Lantern Really Work?
⚅ back to blog
Next →Is Library of Classics Really Worth It?