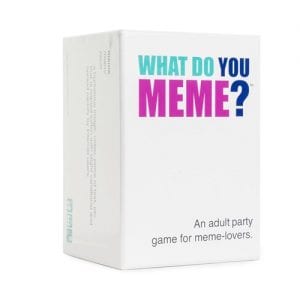 Life shouldn’t be all work and no play which is particularly applicable to the adults. Plus, we are getting into the season where it is time for some socializing. So how about looking at a party game called What Do You Meme.

Overview
What Do You Meme is an adult party game and definitely not geared towards the kids. The game comes with a selection of cards. One group of them is made up of meme cards and the others are captions. One player will take a meme card and place it face up for the rest of the group to see. Now the other players will each choose a caption card to line up with meme. The player of the meme card then chooses the caption they like the best and the player who is chosen as laying the best caption card scores a point.

The Claim
The promoters of What Do You Meme are indicating that it is one of the funniest and most entertaining games that is currently on the market. This particular game is growing fast in popularity simply because memes are. Memes are basically some idea, or type of behavior or style that spreads quickly within a group or culture.

The Hype
The hype around What Do You Meme is really the fact that it is a party game that large groups can play and really it all comes down to the pure fun of it.

The Cost
The cost of What Do You  Meme is $29.99 which is really quite reasonable for a game that will surely be played many times over.

The Commitment
The commitment you are going to have to make is to first gather a group of people together then convince them to play a party game. Once you do this your work is finished except to carry on and enjoy the fun. Chances are that What Do You Meme is going to be such a big hit that you will be expected to hold a lot more social gatherings, so get prepared to become the popular party person.

Evaluation
Anything that can bring a group of people together where they can sit and have fun without becoming wasted has got to be considered a good thing. Plus, there is no doubt that What Do You Meme is a big hit. It has already received 1,555 reviews on Amazon which has shot it up to a 4.5 star rating. This is no easy feat for party games as there is usually a lot of expectations put on them. It is also hard to get large groups of people to have one common element of enjoyment, yet what Do You  Meme seems to be able to do this.

Final What Do You Meme Review

We are going to give this What Do You  Meme game a thumbs up. It has all of the components for providing some great fun. It is a big change from playing video games, and it certainly has the capability of drawing party goers attention and creating a lot of laughs.

Our Recommendation
Once you have tried What Do You Meme as a party game perhaps you will have an interest in trying a few others like Drunk, Stoned or Stupid party game.

What do you think? Does What Do You Meme work or not?

← Previous Does Floor Wiz Really Work?
⚅ back to blog
Next →Does Plantar Away Really Work?