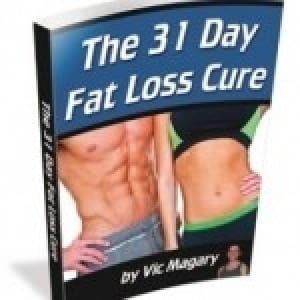 Most of us can get our heads around a month-long program, so the 31 Day Fat Loss Cure sounds like it might be feasible. Although being fat is not a disease, it can definitely lead to several health complications and other diseases, so calling this a cure is not too far of a stretch. It is supposedly the brainchild of a former army man that stumbled onto a weight loss method while in basic training. But does his “secret” really work for everyone, and most importantly will it work for you?

Overview
The pitch to this ebook focuses mostly on getting you to agree that it’s hard to lose weight, and to nod along when he says that he’d tried everything in an attempt to lose weight. Most of us have tried multiple systems, fad diets, exercise programs, fitness equipment, gym memberships, detox diets, you name it, so it’s hard to jump on board with yet another weight loss product promising us what we want.

The Claim
The creator of the 31 Day Fat Loss Cure, a former army soldier, says that he’s now in the best shape of his life at the age of 40, and shows a before and after picture with him having six pack abs. He says you don’t need to join a gym or buy a bunch of expensive equipment in order to see these kinds of results, which would make most people pretty happy.

He says that he learned a secret from being in the army in his first week, and some of these claims are that you don’t need to do long and boring cario workouts in order to burn fat, and you shouldn’t eat whole grains because they effect the body in a bad way. He says that most health experts out there recommend eating whole grains, and even the food pyramid pushes them as healthy and says to get 5-7 servings. He claims that in our caveman days we didn’t eat these because we didn’t have the technology to harvest them.

The only problem with this logic is that what did we eat for the thousands of years before we had the tools and spears to hunt meat? We probably ate wild fruits and vegetables that could be foraged for, and weren’t poisonous. So his rationale is a little off, since he says our diet has been mostly meat based and hasn’t made the switch over to whole grains. By the same token we wouldn’t have made the switch over to meat.

The Hype
The hype doesn’t come so much from the product itself, but from the industry that it’s in, and from so many affiliates out there taking over the top spots in the search results. It makes it really hard to get an accurate answer as to whether or not this works, because everything out there is either a glowing review or a mock “it’s a scam” review, when really it’s just an affiliate site.

The Cost
The cost of the the 31 Day Fat Loss Cure is $80, billed in 2 installments, but you can try it out for $5 and if you like it you’ll be charged the remainder. If you don’t like it you have to go in and cancel the additional charges or you’ll get billed. It’s a ClickBank product so you don’t have to worry about getting scammed out of your money if you’re unhappy.

The Commitment
Having quality information is only part of the process, you have to apply what you learn and that can take some effort on your part. Knowing which foods are good and bad for you does not automatically mean you will stop eating the bad foods and start eating the good ones. This is true for most weight loss systems out there, and although the book is laid out in a good order, you still have to follow the steps and the recommendations to make it work.

Evaluation
The “secrets” he reveals are not really all that secret, but could a be a good grounding for those that are wondering what to eat in a world full of so much information and misinformation. It’s not just that everyone is telling you something different when it comes to health and weight loss, it’s that everyone wants to be the next health guru, and so there’s an overabundance of information out there, far too much for anyone to go through it all.

Here is a video that shows what to expect when you purchase it, and what you’ll recieve:

There’s no reason to believe that the 31 Day Fat Loss Cure won’t help you to lose weight, especially from your midsection. The tips and explanations are pretty good, and the majority of those that try it will see favorable results. It helps to clear up a lot of misconceptions, and we like that he’s not pitching a bunch of pre-packaged meals, or trying to sell you on a fitness machine. It’s a self-contained guide that dispels some myths and gets your head on straight for proper weight loss.

The best strategy is to pick a weight loss expert that resonates with you, and put your blinders on to anything else that goes against what is being taught. What will happen otherwise is you’ll get all gung-ho about following a system like the 31 Day Fat Loss Cure, and then next week you’ll hear someone on the news say something that contradicts what you’ve been doing. This seed of doubt will grow and you’ll start doing research online and lose your motivation to stick with the program.

Our Recommendation
If you’ve already made up your mind that you are definitely ready to lose the weight and carve out a new you, the information in the 31 Day Fat Loss Cure can be helpful to your overall strategy. It’s important to remember that often times there’s not just one magic bullet that will take care of everything for you. You should look at it more like a holistic program of weight loss and well being, rather than thinking that one person has the answer for you under lock and key.

What do you think? Does the 31 Day Fat Loss Cure work or not?

← Previous Does Music Bullet Really Work?
⚅ back to blog
Next →Does My Snoring Solution Really Work?