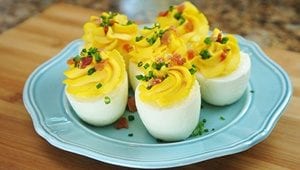 There are many different ways that hard boiled eggs can be enjoyed. But no matter what the final use of them is going to be, they can be a hassle to prepare. That’s because you have to peel the shell off of them afterwards. There is a solution to this and it’s the Egglettes.

Overview
Egglettes are silicon pods that you crack the raw eggs into. Then you place them in a pot of boiling water like you would the egg in its natural state. Once they have boiled for the right amount of time which is usually three to four minutes you just unscrew the top of the silicon pod and the hard cooked egg just slides right out.

The Claim
According to the promoters of Egglettes not only can you cook hard boiled eggs this way but it’s a great way of doing soft boiled eggs. In other words you can cook your eggs just the way you want them except fried of course.

The Hype
The hype around Egglettes is that you don’t have the big hassle of having to peel them once they are cooked. This is a big time saver and avoids the possibility of ending up with egg shells in your finished dish which really makes them distasteful.

The Cost
The cost for Egglettes is $14.99 which gives you six of them then an extra cost of $3.99 shipping fee. Plus you get a recipe booklet to go along with this to give you some additional tips for using the eggs.

The Commitment
The commitment for using Egglettes is less that the commitment you would have to make with cooking hard boiled eggs in the traditional way.You don’t has the hassle of having to peel the eggs after they are cooked. The silicon pods are easy to clean so there is no problem there either.

Evaluation
The concept of Egglettes is really a great idea. Normally if you are going to eat a soft boiled egg you have to just cut the top off of it and use an eggcup. With the Egglettes it is so much better. Then for the hard boiled egg version how much easier can it get. You can now quickly make egg salad for sandwiches or they can be used for devilled eggs. You most likely will do a lot more egg boiling with the Egglettes .

We are going to give the Egglettes a thumbs up rating. We like the fact that they are made of silicon which a lot of the popular bake wear of today is made of. It is easy to clean and it appears to be great for baking so it makes sense it would be good for this egg use.

Our Recommendation
This isn’t the first time that we have talked about innovative ways to cook eggs. If you happen to be a microwave enthusiast then you may want to check out Egg Pops which is along the same line as Egglettes except you are not using the stove top for cooking.

What do you think? Does Egglettes work or not?