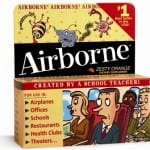 If you’ve ever gotten sick after taking a flight, you might have considered taking Airborne for your next trip. It was all the rage for a while and then met with much criticism that it didn’t work and was over-hyped. But was it worth the hype, or were the naysayers right?

Overview
Following on the heels of Vitamin C lozenges that people would take at the first sign of a cold, Airborne used a clever marketing strategy to convince travelers that they could help them feel better on and after flights.

They do lead you to believe that you’ll be better off by taking their product before entering these types of places.

Despite their savvy marketing most people take Airborne because they think that it will keep them safe from germs and colds when they’re trapped in an environment with lots of other people. It gets its name from being up in an airplane, as many people feel they are breathing recycled air, and sharing the same air as a few hundred other people all coughing, sneezing, and breathing into it.

This strengthens the misconception that many fliers have that airplanes are toxic environments and havens for germs. This is a myth that has been debunked by experts for many years. Airlines use state-of-the-art HEPA filtration to keep the air clean in an airplane. If you need any further proof, you would see many flight attendants and pilots come down with colds on a regular basis, but they don’t suffer from anything other than jet lag.

The Hype
Everyone seemed to jump on board with this product and it enjoyed a large amount of sales in its heyday, earning the creator a hefty sum of cash that they’re probably still operating with. After several news stories came out, as well as a scathing article in Scientific American, people changed their tune and apparently stopped buying. The website for the company still exists and you can still purchase it at your local drug store.

Because it’s a smaller company there’s no way to tell how they are doing, or how long they’ll be staying in business. By making so much money in such a short amount of time they could keep operating for years without earning a profit. They do seem to keep adding to their product line, so there must still be some demand from a core group of firm believers.

The Cost
Airborne doesn’t cost very much, and they encourage using their product repeatedly in order to get repeat business. To make it even cheaper you can get a coupon for $1.50 off your next purchase. It’s currently going for $6-7 at WalMart.

The Commitment
There’s not much commitment involved, just take the tablet in either chewable form, or the original tablet that requires dissolving it like an Alka-Seltzer into a glass of water. After that they recommend that you continue taking it every three hours as needed.

Evaluation
If it will make you feel more secure by taking large doses of vitamins before getting onto an airplane, it may be a good idea for some. There’s nothing bad for you in Airborne per se, but that doesn’t mean it works, and that doesn’t mean you should take it just for the heck of it.

The scientific evidence is lacking that Airborne actually does what it is designed to do. There may be a placebo effect if you take it believing that it will work. Many times a placebo effect can be just as powerful as a pharmaceutical drug, so it’s not a complete write-off.

Our Recommendation
Don’t buy into this quick-fix mentality of Airborne. A healthy lifestyle that you follow every day will provide a much bigger boost to your immune system than just popping an Airborne the day of your travel. If the immune system were so instantly malleable we’d be able to tinker with it as we see fit. A mix of healthy eating, exercise, and whole food supplements that contain all of your required nutrients is the best way to avoid getting sick, regardless of where you are.

What do you think? Does Airborne really work?

127 Customer Reviews on “Does Airborne Work to Help Boost Your Immune System?”