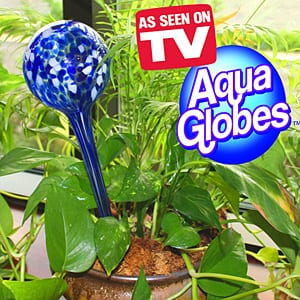 If you like the thought of plant ownership, but aren’t too get at remembering to water, Aqua Globes were invented for you. They’re basically glass bulbs that get flipped upside-down and the theory is they release just enough water when your plant needs it. Because of their unique design they are supposed to prevent over-watering, and also won’t let your plant get too thirsty. But do they come through, or will you be putting your plant’s lives in jeopardy?

The Claim
They say that your plants will be perfectly watered for a period of up to 2 weeks from each fill up of the Aqua Globes. They claim that you can use these for all sorts of houseplants, including those that are hanging, or outdoors. They say that it’s easy to use and that all you have to do is fill it up and insert it into the soil. With their product you can even leave your plants alone while you’re out of town and not worry that they’re drying out. One final claim is that they’re made of hand-blown glass.

The Cost
Aqua Globes come in packs of 2 for around $10. They also make a small version, the Aqua Globe Minis that sell for a little less than their big brothers, and you get an additional one, it’s a 3 pack instead of a 2 pack.

The Commitment
There should be a reduction in the amount of time spent fussing about your ficus. Instead of thinking about it daily, or every other day, you can now set up your Aqua Globes and just put it on your calendar to check them in 10-14 days to see how they’re doing. For most plant owners this will reduce the amount of time spent thinking about their plants, and you can just get back to enjoying their presence.

Evaluation
There is a bit of a learning curve when it comes to using and benefiting from Aqua Globes. Although they seem simple enough, and you’d think they’d work just like they’re supposed to right out of the box, almost every aspect of their usage requires a little bit of training.

Common Complaints
One of the most common complaints about Aqua Globes comes from users not following the directions. Many negative reviews say that the globes do not release the right amount of water because they get clogged up with dirt during the insertion process. The instructions say that you should use a tool in order to clear a path for the tube to prevent this very problem. The globe is not designed to burrow into the soil, it’s shaped the way it is to prevent too much water from coming out all at once, not to push itself into the pot.

The other reported problem is that they do not release the water over time, but do so all at once, defeating the purpose entirely. This can also be fixed by referring to the instructions. It’s all about achieving the right angle once the globe is in place. If you notice that too much water is coming out of it, don’t sit and watch it run out, rotate the globe until it stops. The design works by the soil releasing oxygen which causes the bubble in the globe to release droplets of water to your plant.

Many people have said that their Aqua Globes worked just fine, and the resounding theme is that they provide the results promised if the instructions are followed. One of their selling claims is that they’re easy to use and that they water your plants for you. This is a bit misleading as many people that have used it have had trouble using it correctly, and you still have to be the one that remembers to refill the globe, or you’re back to square one.

A more automatic watering system would be one that collected the condensation and oxygen that plants give off and redistribute it back to them, reenacting rain.

Our Recommendation
For this price you can’t go wrong giving it a try. If they work for you, it will go a long way in reducing the burden of taking care of your plants. If they end up bombing then you’re only out around $10 and a little bit of time. As far as an automatic plant watering system goes, this is one of the few things on the market at this price point that is as easy to set up.

What do you think? Do Aqua Globes work or not?