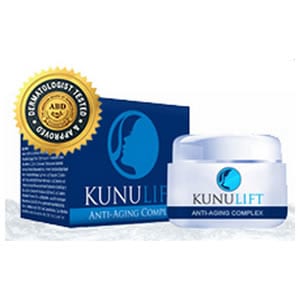 Kunulift is just one of several anti-aging products to come out in the last few years. As the American population gets older and older, more and more people are turning to these so-called “miracle cures” for a chance to turn back the clock and get a few extra years of good looks out of their skin. Many companies are capitalizing on this trend, and so you should only expect to see more of the same for the next 10 years.

Overview
Aging gracefully is one thing, but trying to hold onto your looks or “turn back the clock” is something else. Anti-aging companies know exactly what people want to hear, and know all of the problem areas they have and how to poise their product as the answer to all of them. Only a few, however, are so thinly disguised as the Kunulift product.

The Claim
They say you can look up to 10 years younger by using their face cream. Without saying where these numbers come from they claim that there was an 81% increase of collagen, 29% decrease in wrinkle depth, 32% decrease in furrow depth, from those that used it.

No injections, lasers, or surgery, just by washing your face and applying the product you’ll see undeniable results. They say that it is because their product use peptides, which promote the formation of collagen, which is often brought up as an anti-aging breakthrough. They also say it’s clinically tested. If you use it regularly your skin will be healthier, more plump, and more firm.

They claim their product actually works. Sorry, but that’s our job.

The Hype
All anti-aging products are hype. Aging is a part of life, and these products prey on the intense desire of nearly everyone on the planet to look younger.

The Cost
They have a trial offer which entails just paying shipping, but if you don’t cancel within the 14 days your credit card will be charged $84.87 for a one-month supply, and this is the “VIP” price. It’s not known how much they charge the less important people out there. You will be charged again 30 days later and shipped another bottle of Kunulift until you cancel your “membership”.

The Commitment
There are three steps to using Kunulift, which is rare for a product like this. You first have to wash and dry your face as you normally would, so this probably doesn’t represent an increase of commitment. Then you apply the cream to the problem areas of your face. Last is just a waiting game while you allow the product to absorb into the skin. Then you go about your business. They say that you should use Kunulift daily if you want to see the best results, and it appears to be a once a day treatment.

Evaluation
We scoured the web to find anyone that had tried Kunulift and could say whether or not it worked. All we could find were people that were complaining that it was a scam because their credit card was charged $85 and they were sent another jar of it. Unfortunately, this doesn’t make it a scam because it is clearly listed in their terms and conditions that this is what will happen if you don’t cancel it in time. However, the process they use is misleading.

Most consumers believe that since they are receiving a full one month supply of the product they have a full 30 days to try it out. In actuality it is only a 14 day trial, so most people do not call within that first two weeks and end up getting charged and being sent an additional bottle. Charges like these can be hard to get reversed because you authorize the charge in the fine print during the ordering process, most likely by ticking the box that says you have read the terms and conditions.

The peculiar thing is that they openly admit it takes 28 days to see the best results, so why do they only give a 2 week trial. The whole thing stinks of a scam.

You should be wary of anything calling itself the “Fountain of Youth in a bottle”. You should also avoid products that are sold from one-page pitch sites, the way Kunulift is. There’s no scientific studies given to back up their claims, and the page basically tells you to get their free trial or go away. If it really were a valid product, they would be happy to provide more evidence that it works.

Our Recommendation
This product most likely does not work, and is just a way to get money from unsuspecting and desperate consumers out there. The reason that we are not backing this product is mostly due to its excessive price and its phony free trial offer. Products that employ an ordering system like this are usually not worth it. If your product is so good, why do you need such a shady sales gimmick behind it. Set it at a reasonable price and let people buy it from the start. Free trial offers with an automatic billing are typically reserved for scam products.

What do you think? Does KunuLift work or not?