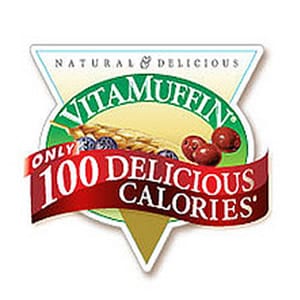 Vitalicious is apparently what you get when you cross vital with delicious. Their shtick is that they produce 100 calorie muffins and snacks to help you curb your cravings and still eat healthy. They’ve also apparently pinched the idea from Seinfeld of selling muffin tops because that’s the best part of the muffin.

Overview
Diets that involve going cold turkey on fattening foods are almost always destined to fail if given a long enough time line. The ones that people can stick with are the ones that allow you to eat things you like once in a while, either through a free day or an off day, or a free meal, or with these sort of snacks where you can eat them and not feel guilty because it’s only adding 100 calories or so to your daily intake.

The Claim
The claim is that Vitalicous snacks are only 50 to 100 calories, allowing you to indulge yourself a bit, but not throw your diet or healthy eating efforts off track. For example, they say you can walk off one of their 50 calorie items with a 7 minute walk. We’re not sure we like the idea of promoting the method of working off what you eat. The real way you should look at it is to give yourself a mild caloric deficit over a long period of time. You shouldn’t think oh if I eat this then I’ll have to do an extra 7 minutes on the treadmill. If Vitalicious works in the overall scheme of things, so be it, but don’t view food as some enemy that you have to undo with activity.

The Hype
The word is spreading about Vitalicious muffins and snacks, and it all started with a sort of grassroots campaign, they’re still using Yahoo shopping cart, so they haven’t gone big time yet or sold out to the man.

The Cost
Vitalicious products seem to be reasonably priced, with many of their offerings coming in a a little over $1 per serving.

The Commitment
You have to be committed to eating just one Vitalicious product per sitting. The danger of 100 or 50 calorie snacks is that your brain will say it’s OK to have 2, 3 or even more at one time. Since they’re perceived as a healthier option, the thought is that you can eat multiples of it and still be OK. And since they’re sweet and delicious, it might be hard to stop at just one, especially if you’re known to binge now and then.

Evaluation
We like that they aren’t trying to put you on “The Vitalicous Diet” where you only eat muffin tops and brownies all day and then have a sensible dinner, like the Slim Fast Diet, or the Special K Diet. These treats are meant to be just that, treats to hold you over between meals so you don’t break your healthy eating habits and go on an eating binge of less healthy junk food.

The flavors they offer are really well thought out, and should satisfy the sweet cravings of even the most snobbiest of eaters. Flavors like Fudgy Peanut Butter Chip, Apple Crumb, and Banana Choco Chip should appeal to a wide and diverse range of taste buds. Usually these sort of 100 calorie snacks just come in regular and boring flavors like Chocolate Chip or Peanut Butter. It’s nice to see them mix things up a bit and realize that just because you’re trying to eat healthier doesn’t mean you’re ready to sacrifice taste and enjoyment.

What People Are Saying
Most people seem really happy with the way Vitalicious snack foods taste, with a few naysayers. One good tip we picked up was that if you pop them in the microwave for a bit the taste and texture improves greatly. This can be especially good for cold winter days when you just want some comfort food but don’t want to pack the pounds on during the winter just to take them off in the spring and summer.

Vitalicious is doing a lot of things right, and we’re giving them our Thumbs Up review. Reasons cited are they seem to really be trying to bring delicious, yet wholesome sweets to those that are trying to eat better but don’t want to subsist on bland, boring food. If you’ve got a sweet tooth it can be hard cutting sugar out of your life, and even harder to resist tempting treats like brownies, muffins, and cookies. With Vitalicious, all you have to do is make sure you don’t put down a lot of them at once and you’ll be alright.

Our Recommendation
Choose the product that is speaking to you the most and give it a shot. The price is right and if you end up liking the taste this is something you can actually do for the long term and you won’t be sabatoging your efforts at weight loss and fat loss.

What do you think? Does Vitalicious work or not?

← Previous How Does the X-Mini II Capsule Speaker Really Sound?
⚅ back to blog
Next →How Good is a Braun Oral-B Electric Toothbrush Really?