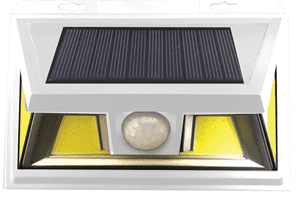 Most often when people are shopping for an item,they will do some research into what is available to them. Most want to invest in what they think is the latest technology. For this reason, they will use resources like the internet. Or, they will further check out Ads like those for As Seen On TV products. One such product that many have a use for is lighting and specifically for outdoor motion sensor lighting like Atomic Beam Sun Blast.

Overview
There are tons of different types of motion sensor lighting on the market. One among the many is the Atomic Beam Sun Blast. This is a solar powered light that is meant to help save on electricity costs. It has a 120-degree motion sensor.
The Claim
Promoters of the Atomic Beam Sun Blast indicate that this is a superior product that has industrial adhesive for making sure it holds in place. It is supposed to detect motion from a distance of 25 feet. It also has a wide angle beam which emits plenty of lighting.

The Hype
The hype for the Atomic Beam Sun Blast is its ease of use when installing and its reasonable price.

The Cost
Depending on where you buy the Atomic Beam Sun Blast you can get it for $19.99.

The Commitment
Not much of a commitment is needed for the Atomic Beam Sun Blast except to decide where to install it and then take the time to do so.

Evaluation
With there being so many similar products on the market one would expect the Atomic Beam Sun Blast to have some unique selling points. Outside of the cost, there doesn’t seem to be much more that is different. However, when checking out the feedback that is currently present for this product, it does raise some red flags. No matter how reasonable the price if it doesn’t live up to your expectations then it isn’t a good deal. The Atomic Beam Sun Blast has received 145 reviews in one location giving the product only a 2.4 out of 5-star rating. Unfortunately, 67% of the reviewers have given it a one-star rating. There are a variety of complaints that have been raised concerning this particular light. One of the common ones is that it stopped working after a short period.

Even though the Atomic Beam Sun Blast is reasonably priced and easy to install we are inclined to give it a risky try/buy. There is no point in investing in a product like this if it is not going to do what you need it to do. You will need to base your decision on your specific needs keeping in mind the feedback that is present. Also, 18% have given it a five-star rating with others between the 5 and 1-star ratio.

Our Recommendation
If you are looking for an alternative to motion light detection that is solar powered take a look at EverBrite.

What do you think? Does work Atomic Beam Sun Blast or not?