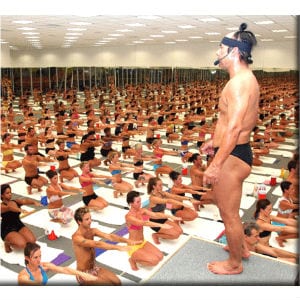 Bikram Yoga is a specific type of hot yoga routine conducted in room with an elevated temperature, and conceived by its founder Bikram Choudhury. Those that get hooked on it say it’s the greatest, but it does take some getting used to. So is this really better than just doing yoga?

Overview
Hot yoga has been enjoying the benefits of being a bit of a trend over the last few years, and part of the reason should be credited to Bikram Yoga, as it is one of the most popular versions. It was started by Bikram Choudhury after he suffered debilitating injuries while lifting weights. He’s even attempted to copyright the specific order of exercises that are performed, and has successfully defended his rights to the routine in court.

The Claim
The claims made by proponents of Bikram Yoga are that it can help injuries to heal, and helps release toxins that ordinary yoga can’t. They say that the heat helps to soften up the body so that the yoga poses can more effectively help the different functions and features of the body. While the same claims could be made for ordinary hot yoga, the claim here is that the unique order and combination of poses is where the magic lies, and it systematically gets your entire body moving, and all systems working at once.

The Hype
This is one of the fastest growing forms of yoga in recent years, and they are certifying large groups of new teachers all of the time. Those that really enjoy it seem to tell all of their friends about it, and try to get them to come to a class. This is positive word of mouth in its rawest form, so it has some buzz surrounding it.

The Cost
The cost of Bikram Yoga depends largely on where you live, and how much your local studio charges per session. Many have said that the classes are a bit pricey, and when you compare them to normal yoga lessons they are. But when you consider that they require a special studio with the ability to crank the heat up to dry sauna levels, you realize that there are additional costs involved in creating the environment, and that it’s not something you can adequately replicate in your own home.

The Commitment
It’s up to you how often you go, and budgetary and time constraints will make it so that you’ll have to find the right balance for you. Enthusiasts go several times a week. A weekly visit might be good for some as a way to supplement their regular yoga sessions, or as part of a comprehensive approach to health and well-being.

Evaluation
One of the emphases of Bikram Yoga is that you’re not required to perform poses that are painful or that don’t feel right. They do ask you to attempt each pose, but they won’t force you into doing a pose you’re not comfortable with, and you can simply wait until the next pose comes along for you to try.

What you’ll notice is that no part of your body is left out of the equation. The 26 different poses are arranged in such a way that your entire body gets a good workout, a good stretch, and gets moving. The routine is so effective that there are even those that try to replicate it and aren’t able due to copyright infringement. If there were another combination that was as effective, someone would likely have figured it out by now and started their own form.

Depending on your familiarity with yoga you’ll either have an easier or tougher time at the very beginning. The poses that are used during the session are not by themselves very hard to do, but when you have to do them in a hot setting they can prove to be rather challenging. If your body is already pretty loose and strong due to your other fitness activities, or possibly from yoga, you’ll find that you have an easier time than someone that’s not. But this shouldn’t deter you from trying if you aren’t exactly in shape. You can also try doing regular yoga for a few weeks or months and work your way up to this intensity level.

Overall, Bikram Yoga is getting our Thumbs Up rating. It’s been peer proven over the years, and is still growing in popularity. The combination of the different yoga poses, coupled with the intense heat leads to a lot of sweat being produced, and provides the equivalent of a cardio routine without the boring monotony of being on a treadmill, or using a stationary bike. The added benefit of helping the body’s circulation, and strengthening your breathing makes it something that’s definitely worth trying out once to see how you like it.

Our Recommendation
For most people, going to Bikram Yoga on a regular basis won’t be feasible. But even going weekly or monthly will help your body immensely, and it’s a great addition to any exercise and fitness program, helping to make the body more liber, more loose, and have less toxins in it.

What do you think? Does Bikram Yoga work or not?