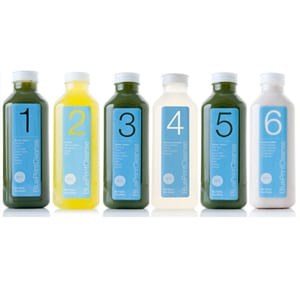 The Blueprint Cleanse is a juice diet that supplies you with everything you need to complete the program, all in specially numbered bottles. It’s trendy, it’s chic, it’s the new way to drop pounds quick and clean out your system, but does it actually work?

Overview
Juice fasting or cleansing or detoxing is the process of replacing food with juice for a set number of days. It resonates on a few different levels because you’re stopping the intake of potentially harmful food and flooding your body with nutrient-rich juices. From a dieting and weight loss view you’re greatly reducing the number of calories that you’re consuming, and are basically fasting but still getting essential vitamins and mineras.

The Claim
The makers of the Bluepring Cleanse claim that they were the original, since there have been so many juice detox diet programs hitting the market lately. They also claim they are the best, since there are many other juice companies going on and on about how great their juice tastes. The reason they call it a blueprint is because the bottles are numbered 1 through 6 and as you move through your day you simply drink the bottles according to the number, starting with one and going to two and so forth.

The Hype
The hype comes from juice cleanses being all the rage right now. There are celebrities that have stated that they slimmed down for a role because of juice cleansing. That is enough to start a trend and get others to try it.

The Cost
All three of the Blueprint Cleanse levels have the same price of $65 a day. This is what turns most people away from it, because they simply can’t justify spending almost $11 a bottle for juice. They try to rationalize the cost by trumping up the quality of the ingredients, but this will still be a tough pill for many to swallow. There are even sites out there that will show you how to replicate the juices on your own for great reduction in cost.

The Commitment
You’ll need to commit to at least completing the original cleanse, and the BPC company recommends going for 10 days before taking a break and evaluating the results. Of course they will want you to stay on it as long as possible at the $65 a day price, but it’s completely up to you how many days you go for. Of course you could even do just one day, which could be enough for some people to see results, and would make a good introduction to juice cleansing.

Evaluation
The Blueprint Cleanse is broken down into three different levels which they’ve dubbed Renovation, Foundation, and Excavation and which translates to Beginner, Intermediate and Expert. They have it so that you can quickly determine your “type” by reading a paragraph describing your take on eating, being healthy, and general lifestyle. The beginner phase is for those that have never done a juice fast before, and aren’t really too concerned about what they eat on a day to day basis, but realize that it’s good to clean up every now and then. The intermediate level is for those that are pretty health conscious and maybe have done a juice fast before. And the expert cleanse is for those that are very serious about what they eat, and about staying healthy and want to scrub out their system in depth.

The major feature of these juices is the price, and if they were priced more reasonably, more people would try it. There is something to be said for a higher cost leading to a higher perceived value, but there is also a limit to just how far people are willing to go to buy juice. For example, if a company was charging $20 for a bottle of juice they’d be burdened with the task of explaining just how impressive the ingredients are that are going in it to make it worth $20. The same is true here, only on a smaller scale. What exactly are they putting in these bottles to make them nearly $11 each?

The Blueprint Cleanse is getting our Solid Try recommendation, as long as you’re set on doing a juice detox. The consensus is that the quality of the juices is high, and that as long as you follow it to the letter you’ll end up feeling better by the end of it. You may also want to check out the competition, since there are plenty of juice cleansing companies offering a wide assortment of organic and all-natural juices for less than the price of the BPC.

Our Recommendation
You should have a strategy in place for what you plan to do after the cleanse, and also do your due diligence to determine if juice cleansing is the best possible choice for what your goals are. They are a nice way to turn over a new leaf, and at the very least they give your digestive system a break from having to deal with the constant task of breaking down whole foods and pulling nutrients from them.

What do you think? Does the Blueprint Cleanse work or not?