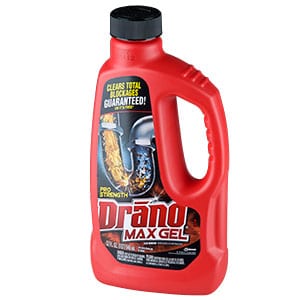 Drano has been around for several decades now and is always coming out with new versions of itself. It has strong brand recognition among consumers, but is this from the marketing efforts of S. C. Johnson or because it actually works?

Overview
Clogged drains are a part of life for most homes, and it only makes sense that drains would clog because of all the twisting and turning they do. The most notorious clogs in most homes happen in the bathroom and kitchen, and it’s usually a high priority to get them unstuck so you can get back to life as normal. The lure to a drain cleaner is that you could potentially avoid calling out a plumber or resorting to trying to act like a plumber yourself.

The Claim
The major claims made on Drano is that it can work to get rid of the gunk that is causing your sink or tub to drain slowly, or not at all. They have several different products to get rid of clogs, and also have a line of septic tank products to make sure that your septic system stays clean and operating well. For each product they make separate claims, for example on their Max Gel they say it has a thick formulation so that it cuts through even tough clogs quickly. They say even if your sink or tub has water in it the gel is heavier so it pours right through it. They also say that it’s safe to use on your plumbing system, even if it is made out of different materials.

The Hype and Appeal
Over the years Drano has received its share of ad campaigns on the television, and along with Liquid Plumbr is one of the few branded drain clearers that you find as your options at the store. People love to save money, and if they can fix this problem on their own and at home it can mean dozens of dolars kept in their pocket.

The Cost
Compared to the cost of calling the plumber, Drano looks pretty good, with most of their products clocking in near the $10 mark or less. It’s also quite competitively priced with its direct competition, and is priced higher than generic and store brands, as you’d expect.

The Commitment
The other good thing about using a drain cleaner like this is that you’re not really involved in the process too much, you just pour it in and let it go to work. If it works, problem solved and you don’t have to worry about it again until it re-clogs. If it doesn’t work you haven’t spent too much to try it out and now you can escalate to the next step of calling a professional.

Evaluation
After so many years on the market, and so many improvements and upgrades made to their already successful product, Drano is still satisfying consumers and getting good feedback from those that try it. So yes, it does work as long as the right conditions are present for its success. With so many things that can cause a clog, you have to make sure that the clog in question is one that Drano is effective on. This would be clogs caused by hair, grime, and other gunk that the solution can break up.

There are other ways to potentially unclog your drain, especially if it’s a clump of hair that has accumulated. There are drain cleaning wands similar to the ones the pros use that are able to snake into your drain and pull out the hairball so that the water can run free again. The draw to using these types of snaking devices is that they are a greener alternative and don’t involve pouring powerful and caustic chemicals down the drain and into water supplies.

Overall, Drano appears to live up to its reputation and in the majority of instances it does make at least some improvement. It may require repeated attempts if it’s a big clog, but it should do the trick at some point. If it’s unable to help you out of your jam, then you were likely destined to call the plumber anyway, so it’s not really the product’s fault, it’s just a clog that is too big for it, or you have something lodged in your pipes that it can’t dissolve.

Our Recommendation
It’s nice to have a few options to go with, especially if you live in a house that seems to have an issue with drains getting repeatedly clogged. We’d recommend getting a DIY drain snake, having a bottle of liquid drain cleaner, and having a trusted plumber in case neither of those work. That way you can keep up with the problem as it goes along, and if it ever gets out of hand you’ll have a system in place for how to deal with it.

What do you think? Does Drano work or not?

← Previous Does the Blueprint Cleanse Really Work?
⚅ back to blog
Next →Does the Oil Cleansing Method Really Work?