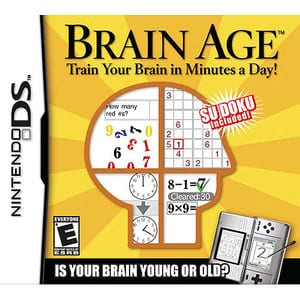 Brain Age is a game for the Nintendo DS that was first released over seven years ago. It uses a series of games and activities that are designed to get your brain working on a more optimal level. It keeps track of your progress and shows where you’ve improved your score on some of the games, and this is meant to represent your brain getting better. It also calculates a “brain age” and you can watch your age lessen as you improve.

Overview
Before this came along there weren’t too many places you could go to give your brain a good workout. Sudoku had just reached its tipping point in the United States as a way for people to keep their mental skills sharp, but there was no place that people could go to in order to get a full brain workout. Now there are systems like Brainetics, and other competing brain game websites that all promise to help with things like focus, concentration, math skills, and memory.

The Claim
Brain Age claims that you can improve your brain by playing their games, and that over time your brain will improve from the mental exercises you put it through. There is a lot to be said for this, since most of us know the old adage if you don’t use it you lose it. This is true for muscles, but the brain is an organ. However, a lot of research has shown that if the brain is not consistently challenged and put through its paces, it can atrophy and a host of conditions can arise, the most scary of which being Alzheimer’s. Keeping your mental faculties sharp is a good way to prevent getting these sort of debilitating diseases, and enjoying life far into your golden years.

The Hype
A lot of the hype for this has died down over the years, but when it first came out it enjoyed a lot of popularity due to a rather effective advertising campaign. It even sparked a sequel, Brain Age 2, which contained more and different games than the original.

The Cost
You can score Brain Age for less than $20 at Amazon right now. This is significantly less than what it originally sold for, and it’s the same game that has been sold for years. For the same price as the game sold for when it first came out you can now get Brain Age 2 and Big Brain thrown in as well. Sometimes it pays to wait.

The Commitment
You have to commit to playing the games daily if you want to see marked improvement. They will encourage you to check back in every day to get your daily stamp. This is earned by playing that day’s lineup of games and challenges. It will log all of your scores and lay everything out for you in a nice graph so you can see your progress, or lack thereof.

Evaluation
Brain Age is a fun way to train your brain, and it also includes Sudoku, which is an added bonus. There aren’t a ton of games, so it can get a little repetitive if you play it for too long, but it’s not meant to be played for a long duration. It’s meant to be played for a short time every day, for a successive number of days so that you can watch yourself make incremental improvements.

These aren’t just random brain exercises that were thrown together to make a game. The system was developed by a real neuroscientist, Ryuta Kawashima, who actually makes several appearances throughout the game. You can tell that there is actual something going on when you play the games. You’re not really learning anything on the surface, much of it is simple math and counting, but the way you have to perform it, and the fact that it’s being timed is where the challenging part comes in.

If you usually don’t get a lot of mental stimulation on a daily basis, then you should think about getting Brain Age. Whether or not it is making you smarter, or turning back the clock on the age of your brain is hard to determine. But it definitely doesn’t hurt to play them, and it makes it fun enough to keep you engaged and coming back again and again to see if you can log your personal best.

Our Recommendation
We recommend picking this up if you have a Nintendo DS. It’s not worth getting a DS if you don’t already have one, if you just want to play brain games. However, it’s a solid game to add to your collection, and if you’re an avid gamer it might even be able to restore some of the brain cells you’ve lost playing mind-numbing games. We’re kidding of course, once you lose brain cells you can’t get them back.

What do you think? Does Brain Age work or not?

← Previous Does Plexus Slim Really Work?
⚅ back to blog
Next →Does the Nest Learning Thermostat Really Work?