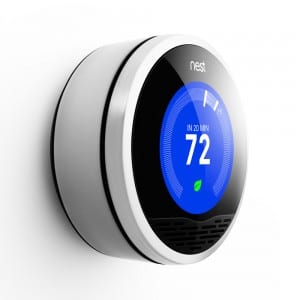 The Nest Learning Thermostat is designed to lower the heating and cooling costs of your home by figuring out how you like to have your temperature, and sensing when no one is home. If you can get over the creepy factor of having an electronic device knowing so much about your lifestyle, this is a pretty cool product they’ve got here, and is definitely worth a further look. It could actually end up saving you money over time, and that always gets our eyebrow to raise.

Overview
If you get as crazy about your thermostat as the dad in A Christmas Story, you most definitely need to get with the times. Digital thermostats are nothing new, but to get the sort of features that Nest packs into this thing, you would have had to have spent tens of thousands of dollars just a few years ago. Being able to remotely control the temperature in your house has several different applications, but being able to come home to a perfect temperature is something you can get used to rather quickly. And after it’s all finished programming itself and saving all of your preferences, it basically works in the background.

The Claim
They claim that the Nest Learning Thermostat can program itself in a week, can sense when the house is empty, and can make adjustments on its own, based on the previous instructions you gave it. They also say that it can be controlled remotely, either on the Internet or through an app on your smartphone. This allows you to break protocol and heat your place up if you’re coming home from work early. Don’t worry about the one-time changes, it will disregard those. But if you start making the same change at the same time every day, it will pick up on it and adjust itself accordingly.

The Technology
They did a tour of Bill Gates’ house many years back when he first moved in and the biggest feature was all of the technology that was integrated into his home. The focal point of the tour was on the fact that his home responded to him entering a room and was able to digitally adjust the temperature. Now you’re able to have the same sort of technology that a billionaire puts into his mansion, at a price that isn’t so hard to swallow, especially when you consider the savings that it could represent with extended use.

The Cost
Nest Learning Thermostat is currently $250 on Amazon. At first glance, this might seem like a lot, but it’s far less than something like an iPhone or an iPad, and those have never helped you save on your heating bill. It’s all relative to how much a product can help save you in the long run, as well as the sort of upgrade it can give to your lifestyle.

The Commitment
They say that most people can install this themselves in 30 minutes or less, and say it takes about as much skill as installing a light fixture. We wish they were more clear on this, because not all light fixtures are created equally. But if you get stuck you can always hire a handyman, and they also offer their own installation service for an additional cost. Many people are reporting that it is in fact easy to install.

Other than installing it, you’ll also have to take the first week to properly program it. After that it should have your schedule memorized, and it is able to record subtle changes as you go along. You can also decide how much you want to get involved in the process, as it provides a lot of data that you don’t currently have access to right now, which can help you determine if you’re using your heating and cooling in the most economical way possible.

Evaluation
Nest Learning Thermostat gets solid positive feedback from those that have tried it out. Most people report on how nice it is on the eyes and to the touch, not surprising that it comes from the same firm that designed the original iPhone. It’s sleek and functions the way you’d expect it to by watching its promo videos. Others have commented on the fact that Nest is always upgrading the functionality of its remote functions, both online and in their app. When it was first released their apps left much to be desired, but the latest versions have more features and allow you to have more control than before.

One thing that was mentioned is that the overall programming will take longer than one week. The first week is all about initial programming, allowing the device to figure out when you want heat and when you don’t. After that it takes another few weeks of pounding out the fine details before it knows your routine better than you ever thought a piece of electronics could. So if you were expecting to get to that set and forget phase after just one week, you might need to hang in there a little longer to get the full effect.

We’re giving our Thumbs Up review to the Nest Learning Thermostat, because it’s just so cool! This is one of those products that proves we’re living at the best possible time ever. It’s also a green product, causing you to use up less resources, and is great to have as a cost savings device. There’s not really any drawbacks that we could uncover on it.

Our Recommendation
Grab this. You won’t regret it. The one-off payment of $250 can be recouped in a year and a half or less if your family currently wastes a lot of energy without even realizing it. But aside from that, there are some really great features to it, like waking up to your desired temperature, or having it automatically put it to a comfortable temperature for sleeping. Being able to control it remotely is one great feature that you’ll no doubt use once you’re able to.

What do you think? Does Nest Learning Thermostat work or not?

15 Customer Reviews on “Does the Nest Learning Thermostat Really Work?”