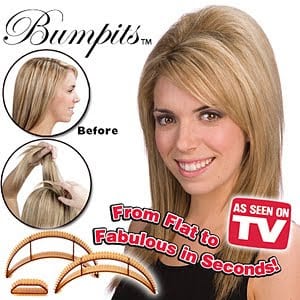 If you thought big hair was a relic of the 80s it’s making a comeback, or at least that’s what the makers of Bumpits are hoping for. Their simple gadget basically goes under your hair to give it that lifted, voluminous look you want but that is hard to get naturally. You are supposed to be able to get the sort of look you see in celebrities and models, but the question remains: does it really work?

Overview
If you’ve got flat hair, you probably find it hard to mimic the styles you see on the red carpet and in glamour magazines. You know these celebrities have stylists, and that these stylists know all the tricks to get their clients’ hair looking amazing. After seeing Bumpits it’s pretty obvious that this is the sort of thing that has been going on in Hollywood for years, and it’s now available to the rest of us at an affordable price.

The Claim
The makers of Bumpits say you can go from flat to fabulous, and that they grip your hair so they don’t move around on you. They also say that it will give you the wonderful feeling like you have when you just get out of the salon with a new hairstyle. A lot of claims for a rather simple design and concept, so let’s see if it actually follows through.

The Hype
Snooki is known to wear these, and she has caused most of the hype surrounding them. Apparently Sarah Palin is also a fan, giving it even more hype. These are two of some of the most talked about women, and usually they’re not talked about in a good way. So this might be a little bit of negative hype, but it’s alright because anyone can wear these and they don’t have to worry about any negative associations.

The Cost
You can get a set of Bumpits for $5 at Amazon, which makes them something you don’t really have to think too much about buying, and you won’t be too disheartened if you don’t like the results. We recommend having them around just for fun, and as an added option when you are trying to come up with a hairstyle for the day.

The Commitment
When you compare this to trying to get the same look using other methods, it’s easy to see that this requires less work on your part. It creates the illusion of thicker hair with more volume, so it is much faster than other methods of styling and should actually reduce your time spent getting ready.

Evaluation
You get three sizes with this, depending on how big of a look you’re going for. The medium one is probably the size you’d end up going with on a daily basis, or at least the one you’d use most often. The larger one would be for more complex styles, like for a wedding or prom. It’s easy enough to put into place, and after testing it out it’s able to stay put throughout the day, so you don’t have to worry about it shifting around or coming loose.

The Learning Process
The first time you try this it might be a little awkward, but most people can get the hang of it in about 10-20 minutes. The good news is that the more you use it, the quicker you get with it, and you feel comfortable trying the more advanced styles. By about the sixth or seventh time you use it you’ll consider yourself a pro and be able to help out your sister or assist your girlfriends if they end up trying it.

Even though it’s kind of a silly invention, it actually does provide a pretty good look if used effectively. Yes, you can go too far with it as evidenced by many of Snooki’s looks on Jersey Shore, but as long as you stick to simpler styles you should have no trouble pulling off pretty sharp looks with little time spent styling.

When you think about it, there really aren’t a lot of other viable options for this, and it would either require a trip to the salon, or a lot of hairspray and some other sort of filler to get your hair to stay up like this. Why bother when for $5 you can crab this and be done?

Our Recommendation
This can be something to keep on hand just for fun when you’re in the mood to be playful with your hair. You can mess around with it and see what sort of styles you can create. We break ours out when we’re wearing a dress, as it works to keep the hair up just a bit, so you can see the necklace that you’re wearing and to give a more elegant look. If you have thin or flat hair it works pretty good at giving it a believable lift.

What do you think? Does Bumpits work or not?