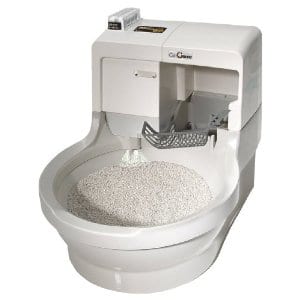 The Cat Genie is one of the more revolutionary ways we’ve seen to fix the problem of having a litter box. It’s basically a cat toilet that has really tried to think of every single problem that a litter box represents and solve them one by one. But did they really think of everything, or is there a better solution than this?

Overview
One of the worst parts about owning a cat is having to coexist with their litter box. It’s pretty disgusting when you stop and think about it. You’re basically living with a pile of thinly veiled cat poop in the same vicinity. And unless you feel like cleaning out the litter box every single time they have to go, it can pile up and leave your home smelling bad. Even cleaning it up can be something of a health hazard, and at the very least it’s not a pleasant task.

The Claim
The Cat Genie claims that it is the all-in-one solution to your cat’s litter box that reduces your interaction to a minimum, takes care of the smell, keeps everything sanitary, and makes it set-and-forget. They claim that you won’t have to empty a litter box, or clean it out, and that you won’t have to keep buying kitty litter because their system uses reusable litter and washes it after every use so your cat always has fresh granules that satisfy their instinct of digging out a spot and covering their waste.

How It Works
The system is set up so that it goes to work after your cat uses it. They liquids fall through the bottom of the tray and get sucked away, and the solids get scooped out automatically, and then sent to the SaniSolution where they get broken down and whisked away. After that it runs a cleaning solution through all of the messy litter, washing it and then drying it so that it’s ready for the next time. The result is that your cat never had it so good. That’s something that we don’t really consider too often, that it’s no fun for your cat either, trying to use a full litter box and find an open spot. With this they always have a good spot every time.

The Cost
The Cat Genie ranges from $270 to $350 depending on which model you go with. To keep it running you’ll need to buy replacement cartridges that are $26 a piece. So yes, it’s kind of a big initial cost, but the maintenance isn’t too expensive, and the convenience factor is through the roof. It’s hard to have buyer’s remorse when you’re counting yourself lucky for not having to clean up cat feces any more.

The Commitment
The biggest draw to this kitty toilet is that you don’t really have to do anything once you set it up. In fact, once you get used to having it in your home you’ll wonder how you ever got by without it. The first few times you’ll wonder if your cat will really use it. Once you see that they do, you’ll start noticing it less and less, and eventually you’ll forget that it’s even there, and when you see it you’ll be reminded of how many times you don’t have to clean out the litter box.

Evaluation
The Cat Genie gets mostly positive reviews, and if you look closely at many of the negative reviews, they praise the product itself and their gripes are with something that are unrelated to its performance. Of course something this technologically advanced is not going to be able to please everyone every time. There will surely be defective units, and some that break down before too long. It’s just a part of manufacturing that there will be some that don’t work right. However, it is clear to see that if you get a working model, it works.

At this price point their customer service should be able to help you out with whatever problem you’re having. Also, some people don’t realize that you will need to be able to hook this up to an electrical outlet, as well as a cold water tap so that it can perform its flushing function. So yes, it does take a bit of set up, but once you have it all hooked up and running, it’s pretty much all you could ask for.

The Cat Genie is a great concept, and you can see that they must have had a few brainstorming sessions to first figure out everything that’s wrong with a conventional litter box, and then another session figuring out how to fix all of those issues. The result works well, and happy owners say that they can return home from a day at work and not be greeted with a smelly full litter box and that makes all the difference.

Our Recommendation
You should definitely invest in one of these. The kitty litter savings alone will help defray the cost, or will at least be a breakeven when you buy the SaniSolution as needed. But the real win here is not having to get up close and personal with your cat’s mess any more. It takes away probably the biggest complaint people have about having a cat, next to all of the cat hair. But if you get a Furminator you are pretty much on your way to getting rid of all of the drawbacks to having a cat, so you can focus on all the fun parts of cat ownership.

What do you think? Does Cat Genie work or not?

← Previous Does the Furminator Really Work for Pet Hair?
⚅ back to blog
Next →Does Fitbit Really Help you Stay Fit?

25 Customer Reviews on “Does the Cat Genie Really Work?”