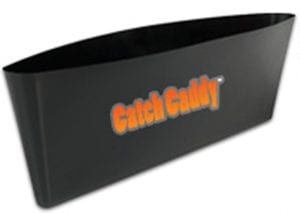 We have covered storage issues in several other reviews, but one we have not talked about until now  storage solutions and organizers for your vehicle. Lets see if the Catch Caddy is a good solution for organizing odds and ends in our vehicles.

Overview
This product has been constructed so it sits between the console and he seats. It is meant to catch those items that tend to drop down to these areas such as cell phones, pens and other miscellaneous items. Some say they like it because it even catches any food that is being snacked upon that happens to fall. These are items that often end up trapped in this area and can eventually create unpleasant odors.

The Claim
The company claims that the Catch Caddy is pliable enough that it will fit between any style seat and console. They say that it moves right along with seat when it is moved. They are also claiming that it is water proof and super easy to clean.

The Hype
The hype centers around addressing what is often a common problem, which is preventing items from slipping into this hard to get at area of your vehicle. They also focus on ease of installation, and simple cleaning.

The Cost
You will pay about $18. for the product, which includes the shipping and handling. You will also be charged an extra $4.95 to cover the costs of sending you a second Catch Caddy.

The Commitment
It certainly isn’t going to take much effort on your part to install this item. What you will have to do though is remember to put those small items in it, so they don’t run the risk of slipping between the seat. Also, when it becomes messy you will have the task of cleaning it.

Evaluation
Anything that allows us to stay organized whether it is in our vehicles, home or office is a good thing. We have talked a lot about different organizers and solutions for these different areas, but have not really looked at storage and organizing for vehicles. Now that we have taken a look at some similar products we have found that if you are really serious about this then you may want to go a bit more elaborate like using the car seat organizers. However, this doesn’t address the problem that the Catch Caddy does.

We are going to give the Catch Daddy a risky try/buy not because we don’t feel that it is a well made product, but for other reasons. Most vehicles have ample storage space for the items that could be stored in this product. If you are not making use of this already built in storage then why pay $18. or more for an additional item?

Our Recommendation
If you really are putting your built in vehicle storage space to use and go do with some extra, then this may be a handy item for you to buy. Before doing so take a good look at where you could best use some extra storage in the car, then take a look at some of your other options.Also, if between the seat and the console has really become a catch all, then you may want to try this product.

What do you think? Does Catch Caddy work or not?

← Previous Does Seeking Health Really Work?
⚅ back to blog
Next →Do Chia Seeds Really Work?

21 Customer Reviews on “Does the Catch Caddy Really Work?”