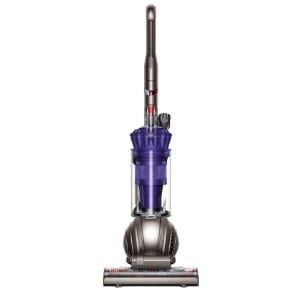 The Dyson DC41 Animal is specifically designed to suck up massive amounts of pet hair. It features all of the same technology that you’d expect to see in a Dyson, but they take it a step further by giving it special bristles and suction to attack dog and cat hair wherever it may lie. So did they get it right with this, or is it just another product claiming to free you of your pet hair woes, but ends up falling short?

Overview
In the world of vacuums, you have your standard name brands that you probably recognize, like Hoover or Eureka. Then you have the Dyson line, and then you have a different tier that gets sold door to door that can be very high priced. The thought is that the more you pay for your vacuum, the longer it will last you, and the better job it will do. If you’re a clean freak, you probably want the vacuum that will give you the most clean for the money.

If you’re a value shopper, you want something that will last you a long time, and provide you a good clean throughout that time. Dyson vacuums are known for being pricier than ordinary vacuums, but are able to last longer, and are able to clean better in one-on-one testing.

The Claim
The Dyson DC41 Animal features the ball technology, so maneuvering it around your home should be a lot easier than with a conventional two wheel upright. It’s also got the cyclone technology that made Dyson famous in the first place. They say they’ve given this one a bit more power so that the suction capability can handle clumps of pet hair and still not suffer any slowdown. It’s even got a special turbine head that is specially designed to lift pet hair from surfaces that it has a knack for clinging to, like upholstery and in the car.

The Reputation
Dyson has positioned itself as a luxury vacuum, with a price to match. However, this is one of those cases where you do get what you pay for, and you’re not just paying extra and receiving nothing in return. This isn’t a case where the name alone is what you’re paying for, the performance actually justifies the higher price.

The Cost
The Dyson DC41 Animal is $540 on Amazon, a full $60 less than the listed price on the Dyson site. It’s also shipped free to your door.

The Pet Hair Battle
Pet hair is the bane of many owner’s existence, and there are several vacuums and other products that all claim to help eradicate it. Depending on the breed of cat or dog you have, you are probably used to fishing singular hairs out of your mouth, using a lint brush to get it off your cloths and furniture, and might have even gotten used to it and now consider it just a part of life.

Evaluation
The Dyson DC41 Animal eats up pet hair like you wouldn’t believe. A seemingly clean area rug can get the once over by this vacuum and you’d be shocked at how much hair it pulls out. The reason is that the hair finds its way in between the fibers of carpeting and rugs, and so you can’t even see just how much is there any more, especially if your pet’s coat or fur is anywhere near the same color as your carpeting. It’s a good thing this is bagless, because you’d go through a lot of bags with how many batches of hair this generates.

The end result is that you’ll finally have gotten a leg up on the pet hair situation, and you won’t feel like your home is covered in a nice blanket of the stuff. Not only that but of course you’re getting your house Dyson-ized, and it’s also pulling up dirt and dust, and keeping it trapped with HEPA filtration.

User Reports
It’s hard to deny that most people that get a Dyson love it. It’s not just the people that provide testimonials on their website, because obviously those are going to be cherry picked for the most glowing feedback, but it’s the third party reviews that are still just as lavishing with the praise. People love that it’s so light, and they also say that it lives up to its promises, and delivers on expectations. These are discerning buyers, since they are looking at this through the lens of whether or not its price tag is justified. It performs so well there’s no buyer’s remorse.

The Dyson DC41 Animal is a performer. Vacuum buyers are tough to please, and pet owners are notorious for being harsh critics when it comes to pet related products. To develop a vacuum specifically for this niche market, Dyson was rolling the dice. They seem to have pulled it off, and based on user feedback, countless real world tests, and their long string of successes, we’re giving it the Thumbs Up.

Our Recommendation
When a product is priced like this, there’s a phenomenon known as cognitive dissonance, which happens when you buy something that is more expensive that you normally would and is commonly referred to as buyer’s remorse. For it to get such stellar ratings means that there is no disconnect in people’s minds between the way this vacuum works, and how much they paid for it. That’s pretty impressive for a vacuum, and that’s why it gets our recommendation.

What do you think? Does Dyson DC41 Animal work or not?

← Previous How Well Does Business Wire Really Work?
⚅ back to blog
Next →Does ChaLEAN Extreme Really Get You Fit?

8 Customer Reviews on “How Does the Dyson DC41 Animal Really Work on Pet Hair?”