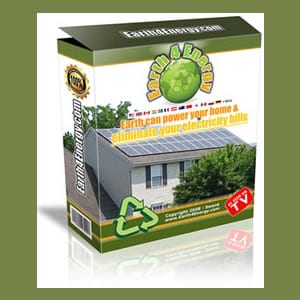 With energy costs on the rise and the economy swaying back and forth you might be looking at installing your own solar panel system with something like Earth4Energy. The system promises to show you how you can do it on the cheap, or as cheaply as possible, from start to finish. The end result is supposed to be a reduction in your power bill, noticeable immediately and on your next statement. But can something like this really result in cost savings?

Overview
Back in the 1950’s when they wrote about the future they thought most everything would be running on solar power. Well, we don’t have jet packs either but we are getting closer to that goal by having some
homes running partly on solar panels. All the big Internet companies like Google and Microsoft also have major solar panel projects in place to help power their massive server rooms. But this doesn’t have to be the realm of the wealthy and multinational corporations. Apparently there is a way for you to get a solar panel system for yourself.

The Claim
Earth4Energy claims that they can show you how to make your own solar panels at home, rather than buying pre-fabricated ones, potentially saving you money on the start up costs of making your home more green. They also claim that you’ll be able to reduce your home energy costs by not relying as heavily on the grid as you do now.

They claim that the guy that started this used to install solar panels on rich people’s houses, and he got the idea to start Earth4Energy when he started wondering how much he could save by doing it himself.

The Hype
The hype is that this product is riding the wave of the Go Green movement that seems to be sweeping the nation. Everyone wants to do their part to cut down on their carbon footprint and help stop the destruction being caused by the human race, but is something like building your own solar panels something that will make a bit of difference to the grand scheme of things?

The Cost
They claim that a typical solar panel install job would set you back $20,000 on average. For just $50 their guide is supposed to show you where to get all of your materials for as cheaply as possible, and how to set everything up.

The Commitment
Hiring a professional company would be the ultimate in no commitment. By doing it yourself you are signing on for the project from start to finish, so you should definitely resolve yourself to see it through. It won’t make sense to get it started and then not finish the job, because you’ll have spent the money on materials and not be enjoying the cost savings of having it going to work for you.

Evaluation
The Earth4Energy guide is not the only guide out there that promises to be able to show you how to do this sort of thing. However, many people that have tried what’s available have stated that this one is more comprehensive, has better support after you make your purchase, and actually have produced panels that work to produce actual voltage. For the entrepreneurs out there, you can even build these panels and sell them to others at a nice tidy profit.

We like that Earth4Energy is making a philanthropic effort. They already donated $3500 among three different charities, so they’re not just trying to take the money and run to some island nation and sip pina coladas for the next 20 years.

If you follow the directions provided, you’ll definitely have a solar panel system that generates electricity. The only things that can screw up the Earth4Energy guide is if you don’t follow the steps exactly. Some people will skimp on the materials, or try to change the recipe, and end up with something that doesn’t work. Or they won’t be willing to pony up the dough needed to make the panel that they want or need. Others just won’t follow through and will be left with a half-completed project.

Our Recommendation
They’ve really made a strong point. When you consider your alternative for a solar panel, you can either pay a small fortune to have it professional installed, or you can save money on the installation, and going forward by doing it yourself. If you are going the DIY route, how will you begin? What steps will you follow? What materials will you need? Why run around trying to find all of this information, when someone else already has and has compiled it in one source?

If you’re bent on having a solar panel for your home, definitely grab a copy of Earth4Energy. You’re always protected by their guarantee, so if you get halfway through the project and realize it’s not for you, just ask for a refund and part as friends.

What do you think? Does Earth4Energy work or not?