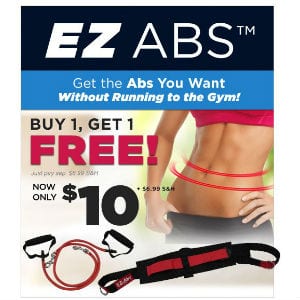 EZ Abs is pitched as a way to get the abs you want without having to go to the gym. It is a strap that looks like it might attach around the waist, but they never show it in action, so there is still some unclarity as to what it actually does.

Overview
Getting great abs is often made out to be akin to rocket science, with only those that have the secret are able to accomplish the feat. That’s why there are so many gizmos that are especially for the abs. People really don’t want to have to do sit ups or crunches in order to get a six pack, they just want something to do the work for them.

The Claim
The makers of EZ Abs have done a pretty good job of making claims but not providing any explanation as to how their product works to accomplish these claims. There isn’t a video that shows a fitness model using it, the way you usually see one for fitness products of this nature. There also isn’t anything we could find that would suggest this works any better than the other equipment found at local gyms across the country.

The Hype
The hype is the same with any abs product because we all have that image of the perfect six pack, and we’d all like to get it, but few of us are able to put the time and dedication into it, as well as eat the right foods to show off the chiseled abs underneath. Anything that promises a six pack of abs is dabbling in a bit of hype.

The Cost
EZ Abs is shown at a price of $10 but quickly jumps to $24 due to paying for shipping on the original unit plus paying shipping on some bonus workout cables they include. The workout cables are supposed to work as a standalone product in addition to the EZ Abs core device. The offer is a bit confusing because in one spot they say it’s buy one get one free, but in another spot they say it’s buy the EZ Abs and get a pair of workout cables free. Either way the cost is $24 and you’ll likely end up with just one EZ Abs and one set of cables.

The Commitment
You will need to use this product on a regular basis to see any sort of results, and if you want visible results you’ll need to commit to a diet program as well to reveal your muscles from underneath your fat. Diet accounts for a large portion of how you look, and it could be that your core muscles are already pretty defined, you just can’t see them because of the fat that is over them.

Evaluation
The EZ Abs system is still something of a mystery as we were unable to find video evidence of how it is used to provide an abdominal workout. When you tell people they won’t need to go to the gym anymore to get good abs you have to be able to back it up with a product that replaces the kind of workout you can put your abs through at the gym. Most gyms have equipment that is designed to target the abs, either with a crunching motion with added weights, or they’ll provide an incline bench for you to do sit ups on, thus using your own body weight as the resistance. Of course you can also hold a weight on your chest to add even more resistance.

Generally a product like this takes great pains to show how it works, and to show why it works. We’re seeing none of that which leaves a big question mark as to how this would actually strengthen your abs, and a bigger question of why would anyone buy it without first knowing what it looks like when you use it.

The EZ Abs product is getting a pass from us, because it doesn’t do a good enough job of explaining how exactly it does what it says it can do, and there are more effective units out there that have actually been peer proven to strengthen abs. It’s always best to go with products that have withstood real world tests so that you know you’re at least buying a product with the possibility of providing results. With this one you just don’t know what you’re getting, literally.

Our Recommendation
When trying to work out your core specifically it’s good to go with a product that adds additional resistance, especially for the guys. Your abs are just like any of your other muscles, and they respond well to resistance training. You can get harder core muscles, and more definition between them by increasing their size. Go with a diet plan that can help you lose the weight around your midsection to reveal your newly defined abs.

What do you think? Does EZ Abs work or not?