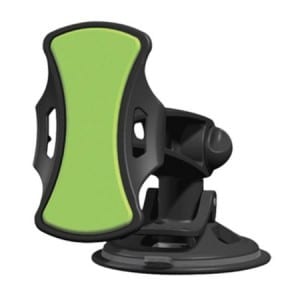 The GripGo Phone Mount is pretty remarkable when you first see it, and there will no doubt be some imitators that come along and try to ride on its success. It allows you to stick your phone to it quickly, and then swipe your phone off it it easily when you leave the car. The whole time it frees your hands up so they can stay on the wheel. But how well does it work in real life?

Overview
Companies have been trying to figure out the perfect solution on what to do with your phone while you’re driving. The safest place would be in your pocket where it won’t do you any harm, but most people are not willing to do that and enjoy drive time with their phone. This seems to be a compromise, limiting the amount of time you spend holding your phone, and making sure it stays in place so you don’t go chasing it around while you’re trying to drive.

The Claim
GripGo claims that their phone mount will hold your phone in place tightly and securely, and allow you to rotate 360 degrees, as well as let you take it off easily when you’re ready. When this works is that the surface has small suction cups that keep your phone in place, but then release their suction when your phone is taken off at an angle. They say that it doesn’t leave any sticky residue on your phone, and they prove this by showing the phone being taken off the mount and directly placed onto a pile of feathers, where it doesn’t pick up a single one.

The Hype
The infomercial for this is pretty convincing, showing all the necessary features that would get people excited about this. The demonstrator holds the phone out of the window as he drives along, and even shakes it and it stays on the mount. He then shows that he’s immediately able to take the phone off when he chooses to. That’s the major concern most people would have, not wanting to struggle each time they want to take their phone off the mount.

The Cost
The total cost of the GripGo phone mount is $26 but you get two units for that price. Most people won’t mind having a second one, especially if they have two cars. But they also bring up the idea of letting your backseat or front seat passengers use these as well so they can watch movies on an iPad or other tablet and have the screen in place without needing to hold on to it. Think long car rides with the kids in the back.

The Commitment
There’s not really much involvement on your part once you secure this into place and put your phone on it. It might take a little getting used to at first, but most people find that they adapt to it quite easily. Occasionally they say that you might need to rinse off the surface of the unit gets dusty or dirty and starts to lose its gripping ability.

Evaluation
The GripGo phone mount has been getting good reviews from those that have bought it and used it for a period of time. This is always good to hear because when a product has been effective in commercial there’s always a possibility that it was shown in its best light and the product you actually receive doesn’t perform as shown. But early reports are showing that this actually lives up to its expectations, and provides a reliable and effective phone mount.

The only problem is that this solves one problem but potentially causes another. It takes the phone out of your hand but then sticks it right in the middle of your windshield, partially obstructing your view, and drawing your eyes to your phone rather than the road. If you want to be truly safe you wouldn’t be looking at your phone’s screen, so their claim that this is a safer way to use your phone in your car is a bit dubious. Yes, if you’re as crazy as the person in the video who goes diving for their dropped phone while they’re driving their car, it’s safer. But the best thing to do is simply wait until you get to your destination and then use your phone.

The GripGo phone mount is getting our Thumbs Up rating because it does work as depicted in its promo video. It’s up to you to figure out how to use it safely, and you’ll have to make sure you use it in a safe manner. If you did get into an accident and the police saw you have your phone obstructing your view it’s not going to bode well as it gives them reason to suspect you were distracted. This phone mount would have been better if it came around several years ago before smart phones came along and cell phones were mostly used to make calls with.

Our Recommendation
As long as you keep your eyes on the road and off your phone while you’re driving this should be the phone mount that gets the job done. We’ve seen other phone holders that don’t seem to work as well as this, even though they have their own unique design. The material they’ve used for the surface is way cool, and you’ll be hooked once you slap your phone onto and and slide it off the first time.

What do you think? Does GripGo Phone Mount work or not?

← Previous Does Stages of Beauty Really Work?
⚅ back to blog
Next →Does Jillian Michaels Body Revolution Really Work?

53 Customer Reviews on “Does the GripGo Phone Mount Really Work?”