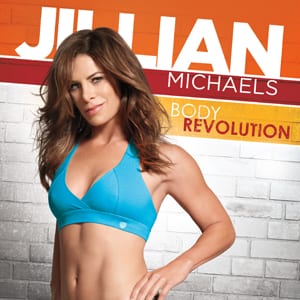 Jillian is at it again with Jillian Michaels Body Revolution, a way to get extremely fit without the need for a gym. If you’re familiar with the way she pushes contestants on The Biggest Loser and you’re hoping to harness some of that boost for yourself, this has probably caught your eye. But how does it measure up to everything else that’s out there?

Overview
Fitness has been going extreme in recent years, with a virtual arms race going on between different programs to see which one can push the body past its limits the most. There’s some solid theory behind this, because you want to get the body to your goal weight as soon as possible and then simply maintain when you get there rather than slowly see progress over a longer period of time and potentially get discouraged and revert back to your old ways. The contestants on The Biggest Loser all go through extreme changes in a short period of time, so perhaps she’s figured out how to replicate their success.

The Claim
Jillian claims that you’ll be able to transform your body in 90 days, which is a popular time period for today’s more extreme body makeover programs. She says that because of the way she’s structured it into three distinct phases, you’ll never get bored with it. Because she’s a personal trainer and a nutritionist she seems qualified to instruct people on both facets of fitness and health, providing the one-two punch that’s needed to see the best results.

The Hype
Jillian Michaels is where this program gets the hype, and there’s not much she can do about it. By putting her name on it and being directly involved in the training she’s basically passing the credibility she’s earned from Biggest Loser to her own training program. People are going to automatically assume that they’ll get dramatic results like the ones they see on the TV show. Even if she looked directly at the camera and said that those results are not typical it would still be in the back of people’s minds.

The Cost
The total cost of the Jillian Michaels Body Revolution system is $135 but they break that up into 4 payments of $30 plus the shipping charge on your first payment when you order. You can also opt to pay it all up front, although there’s no discount given so there’s not a pressing reason to do so unless you just want to get it out of the way. Compared to other extreme training programs like P90X2 and Insanity this price point is right on with your other options.

The Commitment
The 90 day commitment might sound daunting when you look at it all together, but she’s got it broken down into three phases, so you should really think of it as three 30 day sessions. The workouts change with each one so you won’t have to go through the drudgery of doing the same thing over and over again for three entire months. They’re also just 30 minutes each day, unlike some programs that can have you working out for 40 minutes to an hour in some cases.

Evaluation
The Jillian Michaels Body Revolution is getting mostly positive feedback from those that have given it a try, which is unusual in the fitness industry. It’s been said that even though it’s extreme, it starts off at a level that most people can get on board with. It then shifts things to the next level in the second phase, but at this point you’ve got 30 days of training under your belt and you’re able to keep up.

What You Don’t See on TV
It’s a good idea to remember that there’s a lot going on at the Biggest Loser house that you don’t see on camera. These people have a razor sharp focus because they’ve been removed from their family and friends and from all of the temptations that their lifestyle brings with it. This takes away a lot of the opportunity they have to cheat on their diet or skip a day of working out. If you’re trying to complete the 90 day challenge and you’re surrounded by the same triggers and temptations you might find it harder to stick with any program long term.

They contestants also get a lot of support from the fans of the show, and they’ve got the very public weigh in to keep them motivated to stay the course. When you’re by yourself at home and trying to stay motivated it’s going to be harder, and you’ll have to come up with your own ways to keep showing up every day. Taking your own before and after pictures and doing your own weigh ins might help replicate how the show works.

Jillian Michaels Body Revolution is getting our Thumbs Up rating, since it provides the tools to help you change your body in a relatively short period of time, and because it breaks things up nicely so that 90 days doesn’t seem like a marathon you can’t win. If you’re a fan of The Biggest Loser and you like her style of motivation then you’ll probably be able to stick with this for the long term, and she can fill in for the personal trainer role. Not having to go to the gym is a big plus, and can be very helpful for those that live in climates with harsh winters.

Our Recommendation
At some point you’re the one that decides whether this is going to work for you or not. She’s provided everything that’s needed, and the system is laid out in a step by step manner. All that’s required on your part is to push play each day on the DVD player and follow along. It’s always a good idea to try to plan these 90 day challenges around your schedule, avoiding the holidays, travel, and birthdays, as these can be the times when you’re most likely to jump off the track and you’ll have to start over again at the beginning.

What do you think? Does Jillian Michaels Body Revolution work or not?

← Previous Does the GripGo Phone Mount Really Work?
⚅ back to blog
Next →Does ElimiTag Really Work?